Khali has praised the AAP government's work on electricity, water, schools and hospitals in Delhi. 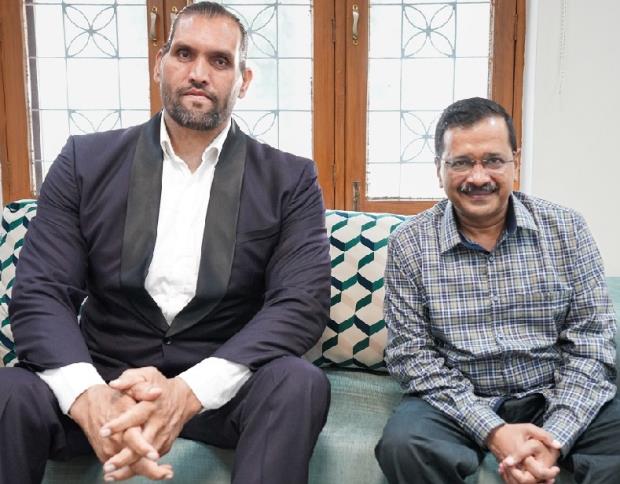 In what could be called a major push for Aam Aadmi Party in Punjab, the famous World Wrestling Entertainment (WWE) wrestler- The Great Khali met Delhi Chief Minister Arvind Kejriwal on Thursday. The wrestler has extended support to Kejriwal’s party ahead of Punjab assembly elections 2022.

On Thursday, Khali praised the AAP government's work on electricity, water, schools and hospitals in Delhi.

Arvind Kejriwal posted the photograph of him meeting the wrestler on Twitter and wrote in Punjabi, "Today, I met The Great Khali, a wrestler who has made India famous around the world. He lauded Delhi's work on electricity, water, schools, and hospitals. We will change Punjab together now".

Kejriwal's tweet has raised the speculation of Khali entering politics. Khali belongs to Punjab and has a major fan following in the state.

In case he decides to join AAP ahead of upcoming Punjab polls, the political spectrum in state will take a notable shift.

Dalip Singh Rana alias the Great Khali has served as a constable in the Punjab Police in Jalandhar. He left the department after entering International Wrestling.

Besides wrestling championships, Khali has appeared in two Hollywood and two Bollywood films, as well as several serials and video commercials.

A few days ago, Kejriwal also held a meeting with Bollywood actor Sonu Sood. Actor’s sister Malvika Sood will contest the Punjab polls, which are scheduled to be held early next year.

Malvika is likely to contest elections on AAP or Congress ticket, however, there has been no report on the matter, so far.