Khattar speaks of 'tit for tat response for farmers'

A video of Haryana Chief Minister Manohar Lal Khattar is circulating on the social media where he can been heard telling to counter farmers. 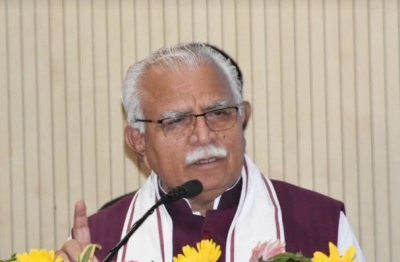 A video of Haryana Chief Minister Manohar Lal Khattar is circulating on the social media where he can been heard telling to counter farmers.

While addressing the BJP state farmers' wing he said,"prepare 700 to 1000 volunteers in Haryana's north and western districts pick up sticks, follow tit for tat."

The Chief Minister did not stop there and said that "don't be afraid of going jail -- you will come out as a leader."

After his statement has gone viral Congress has demanded his immediate sacking from the Chief Ministers post.

Congress chief spokesperson Randeep Surjewala said, if a Chief Minister will propogate violence then how will the law and order will run in the state.

Khattar statement has come when the farmers agitation in Uttar Pradesh has turned violent and the farmers alleging that Union Ministers son is involved in the incident.

At least six people were killed in violence in Uttar Pradesh's Lakhimpur Kheri on Sunday, while 15 others are injured, according to official sources.

Protests on farm laws in the district took a violent turn as unidentified persons opened fire at the farmers.

Infuriated farmers set three jeeps on fire after some of the protestors were run over by the vehicles.

One of the vehicles is said to belong to Ashish Mishra, son of Union Minister of State for Home, Ajay Mishra Teni.

Farmers have refused to allow post-mortem examinations of the deceased. They have said that they will decide the future course of action only after talking to their leaders.

Chief Minister Yogi Adityanath has appealed for calm and has assured action against the responsible people.