Karthik has also shared this motion poster of Kiara and wrote, 'Welcome to the world of Bhool Bhulaiyaa Kiara Advani. 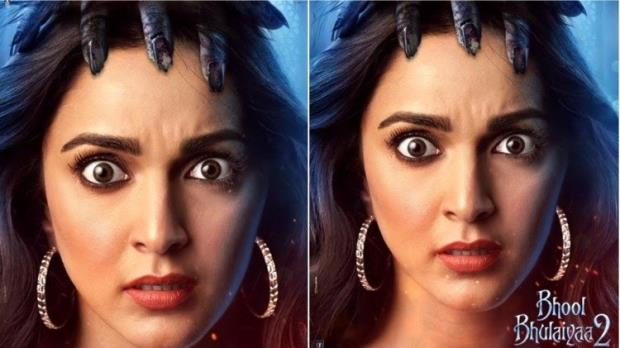 From the film Bhool Bhulaiyaa 2 till now, the look of Karthik Aryan was revealed which was well-liked. Now a glimpse of Kiara Advani's character has also surfaced for the fans.
In this, Kiara looks nervous and shocked. Only then comes a hand with big black nails on his head. The name of Kiara's character is Reet.
Giving a glimpse of her character, Kiara wrote, 'Meet Reet Se, don't be a fool. It's not sweet. At the same time, Karthik has also shared this motion poster of Kiara and wrote, 'Welcome to the world of Bhool Bhulaiyaa Kiara Advani.
Meet Rooh Baba ki Reet. From this post of Kiara, it seems that there will be a shadow of a ghost or spirit inside Kiara in the film. Well, will the story be, it will be known only after watching the film?
Also Read: Akshay Kumar apologizes for the Pan Masala Ad, says ' Your response in the last few days....'
The teaser of the film was released a few days back, which has been well received. Along with Karthik, Rajpal Yadav was also seen in the teaser.
When will the movie release: Bhool Bhulaiayaa 2
Directed by Anees Bazmee, Bhool Bhulaiyaa 2 will hit the theatres on May 20. The film was earlier planned to release in July last year, but due to COVID, the release date of the film was shifted to March 25.
But then at that time SS Rajamouli's film RRR was about to be released, so to avoid a box office clash, the release date of the film was changed and now fans will be able to watch this film on 20th May.

What will be special in this: Bhool Bhulaiayaa 2
Talking about the film, In an interview Anees told that this film is special for him as it is his first horror-comedy film. This time he will scare people too. He also said that he will present this subject differently.
The first one was Bhool Bhulaiyaa's psychological thriller film with comedy. This is a horror-comedy. The challenge is that people have to remind the first part, but at the same time give a different experience.
By the way, The big task for the entire team regarding this film is how to separate this film from the first part because the first part was a superhit and its story was interesting.
Akshay had tremendous acting in the film and Karthik has to go above that level. So let's see whether this film can do more than the first part or not. Apart from Karthik, and Kiara in the film, Rajpal Yadav and Tabu are in the lead roles.