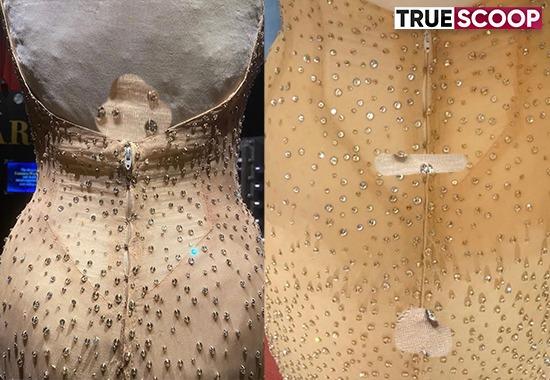 Marilyn Monroe Dress: Reality show star Kim Kardashian wore Marilyn Monroe's famous 'Happy Birthday President' dress to the Met Gala. The museum that gave the dress to Kim says that now Marilyn's dress has been damaged forever. To attend the Met Gala this year, Kim chose Hollywood star and legendary actress Marilyn Monroe's nude embellished gown, which Marilyn herself wore for President John F. Kennedy in 1962. Wore while singing 'Happy Birthday President'.
There was a controversy when Kim wore this dress that she should not have worn Marilyn's dress, but now that the matter of permanent damage to the dress has come to the fore, Kim is facing more criticism. It was only when Kim wore the dress that the dress was seen to be tight on her, Kim was seen keeping her feet on the hem of the gown several times and lines were visible on the dress near Kim's waist.
The cost of Marilyn Monroe's gown adorned with crystals is $ 4.8 million. This dress was bought by Muse Ripley in the auction. It has also been called the most expensive dress ever. The fabric of this dress is sheer which is studded with stones from top to bottom.
Also Read: Kim Kardashian faces flak for ruining iconic Marilyn Monroe outfit
The designer's idea behind making this dress for Marilyn was that on seeing Marilyn wearing the dress, she looked like she was wearing diamonds on her body. Now looking at the dress, the fabric of the dress is seen being stretched around the chainring part from behind. Fans say that the museum should not have given Marilyn Monroe's dress to Kim.
Storing any textile is a difficult task and wearing such a delicate, pop culture icon and historical dress is no less than a risk. Many fans have also condemned Kim's wearing of this gown.