Puducherry Lieutenant Governor (L-G) Kiran Bedi on Wednesday posted a cryptic post on Twitter, backing Delhi police personnel in the recent clash between lawyers and police in the national capital

Puducherry Lieutenant Governor (L-G) Kiran Bedi on Wednesday posted a cryptic post on Twitter, backing Delhi police personnel in the recent clash between lawyers and police in the national capital.

Bedi said, "Leadership is a 'Character' that takes responsibility and takes tough decisions. It is a 'life' of 'doing'... Tough times go, Memories of Tough Acts Remain."

Kiran Bedi's cryptic tweet seems to be in support of the protesting Delhi police personnel, who said no action was taken by their seniors after some of their colleagues were assaulted by lawyers at Tis Hazari court premises and outside Saket court on Saturday and Monday respectively.

She further said that "rights and responsibilities" are two sides of the same coin and urged citizens to always remember this.

"Whoever and wherever we be. We need a major shift in our emphasis in this regard. When we all exercise our responsibility of being law-abiding there is no conflict," she added.

While thousands of protesting cops called off the agitation on Tuesday, a bitter episode was witnessed as over 10,000 police personnel staged an unprecedented protest outside their own headquarters in Delhi's ITO.

Also Read: After another attack on police, Cops protest outside police HQ, IPS officers condemn assault by lawyers on Twitter

The cops protested on Tuesday as no action was taken by Delhi Police Commissioner Amulya Patnaik to protect their rights. Patnaik tried to convince the protesting cops to call off the protest but he was booed.

During the agitation, many police personnel chanted slogans praising Kiran Bedi, who had been very popular when she was served as an IPS officer in Delhi. Cops held posters of the former Delhi DCP (Traffic) and repeatedly raised the slogan 'Police commissioner kaisa ho, Kiran Bedi jaisa ho (What should the police commissioner be like? He should be like Kiran Bedi)'.

Yesterday's protest by police personnel also showed that there seems to be a disconnect between senior and lower-ranking officers of the Delhi Police.

"We are being beaten up but our senior officials and commissioners are acting as mute spectators. We are not wearing this uniform to get assaulted every day," a protesting cop said.

Meanwhile, a Supreme Court lawyer has served a legal notice to Delhi Police Commissioner Amulya Patnaik for "not taking action against the Delhi Police Force personnel, who actively participated in yesterday's demonstration in front of the headquarters. 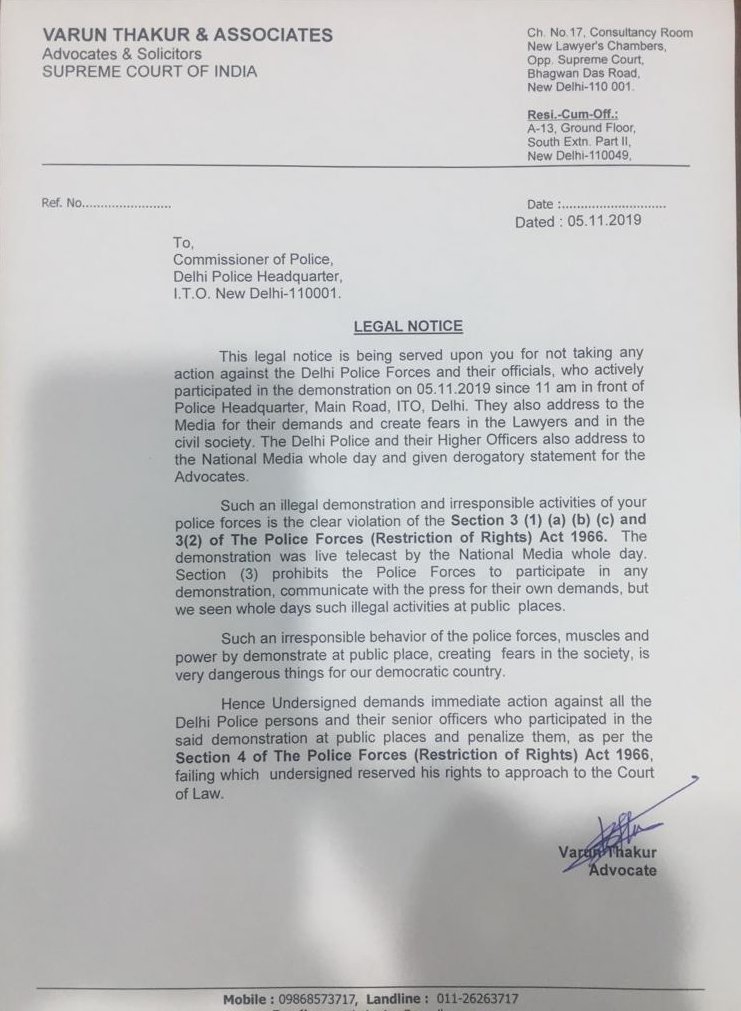 On the other hand, Delhi Police has also submitted a report to the Union Home Ministry on the violence that broke out between lawyers and cops at the Tis Hazari Court Complex on Saturday. At least 20 security personnel and several advocates were injured in the clash.

A home ministry official said that it was only a factual report in which the Delhi Police has given details of the circumstances leading to Saturday's incident and the action taken after it.

As per the official, "It does not cover what happened after Saturday, including an incident on Monday in which a video shows a group of lawyers purportedly assaulting a policeman outside the Saket court."

Get the latest update about National News, check out more about True Scoop News, Kiran Bedi, Lawyers vs Delhi Police & LG of Puducherry