Following on the lines of tech major Meta and Twitter a week long speculation about Amazon's laying off came on Wednesday, however, the number is not known 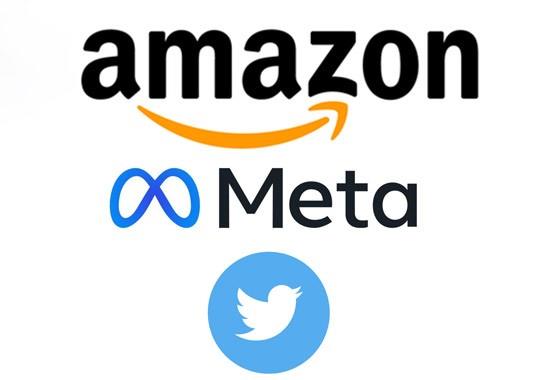 Amidst the threat of a possible recession which has been flagged by several notable economists and finance experts in the US, the major tech giants based in the country have started taking the route of mass layoffs, in order to ensure the cost-cutting in a move to brace up against the recession.

And when it comes to the stand of Indians contributing to the tech industry in the US which eventually amounts to the US economy it has added nearly a whopping $198 billion of wealth alone in 2021.

The link associated with Indian techies and the tech giants based in the US has a great long history and at a time when the threat of recession country’s second of the century looms over these techies that have generated billions of wealth are also feeling the heat.

Major tech giants have started making massive mass layoffs which include Twitter, Meta, Amazon, and Netflix among others. However, the story is in no way ending here, and as the notable economists suggest the worst might follow soon.

But what are the reasons that have taken this route, and among those adversely affected are the Indians that make up the major faction of the techies’ workforce in America?

There are two prominent reasons that the fin experts and notable economists have flagged behind the cause of these mass layoffs in the major tech giants.

1. Massive employees hike post-pandemic: Many tech giants have released official statements post announcing the layoffs saying during the boom right after the pandemic and now as it is fading the move comes inevitable for the companies.

2. Rise in Inflation: In March 2022, the US recorded its highest-ever inflation in 41 years at 8.4% though have eased a little the pain is still significant which is making it for the brands tougher to spend much on digital advertisements, which makes a huge portion of revenue for these companies.

3. Post-COVID Reality: In the wake of COVID, tech companies hired too many people. It is pertinent to mention that these are not casual workers or admin staff working just $10 an hour these are highly professional software engineers with handsome earnings. Many experts believe that returning to a world of post covid reality might require some level of overstaffing for redundancy is necessary, but it's clear that in many companies, it’s gone too far.

Reportedly, a total of 217,404 employees across more than 1,300 tech companies have been fired since the Covid-19 pandemic. While this year a total of 121,000 employees have been laid off from nearly about 800 companies.

The major part of this was seen in November when the tech giants like Twitter, Amazon, and Meta announced the layoff. Microsoft also announced the firing of around 1000 of its employees worldwide.

Layoff of the major tech giants in numbers:

Soon after Elon Musk’s takeover laid off 50% of its workforce worldwide which nearly makes around 3700, in a tweet defending his move Musk wrote, "Unfortunately there is no choice when the company is losing over $4M/day." Tesla’s boss added through the tweet about the layoff, adding that everyone affected was offered three months of severance pay.

The company announced laying off 11,000 employees from its strong workforce. The announcement came from the company’s CEO Mark Zuckerberg after the share price of the company saw a 70 percent drop.

In a long blog post, Zuckerberg took accountability for the Meta Layoffs and stated that due to overstaffing and cost cuts, he would now be working towards laying off employees. The Meta layoffs have been reported to be the worst tech layoffs so far.

Clearing away all the forms of clouds on the layoff, Amazon finally announced the through companies, key position holders, Amazon's spokesperson Kelly Nantel said as part of the annual operating planning review process, certain roles are no longer necessary.

Guiding the company’s move their hardware chief Dave Limp in a memo written to the employees showed, "After a deep set of reviews, we recently decided to consolidate some teams and programs. One of the consequences of these decisions is that some roles will no longer be required,” which was made on Wednesday only.

Adding further to the memo Limp mentioned, "It pains me to have to deliver this news as we know we will lose talented Amazonians from the Devices & Services org as a result.”

Reportedly, Amazon is expected to fire nearly about 10,000 employees which are going to be the highest in the company’s history.

Among other big names that have fired employees at a massive rate include many other big names like Uber, Airbnb, Zillow, Coinbase, Netflix, Spotify, Peloton, Shopify, Stripe, and Robinhood.

Many of these companies were facilitated with loans at absolutely no interest and went on to invest in big projects during the COVID at present in the post-pandemic world with rising inflation, the banks have increased the interest rate to check the further rise of inflation, which has added to the concern of these tech giants.

The story in India’s tech world is not too far the ed-tech giant Byju’s has also taken the route to firing the employees leading the trot among Indian companies. Reportedly nearly about 16,000 employees have been fired by now this year in Indian start-ups whereas, 5000 lost their jobs alone in the last month.

However, is this the end of the spike now in the laying-off spree, the answer to this question doesn’t seem easy or conclusive anyway as of now? Experts believe the situation can only be brought under control by the Federal Reserve’s consolidative plans keeping all the stakeholders under confidence and working towards marking a plan that caters to the needs of those affected by it.