Know why Vienna is ranked as 'World’s Most Liveable City', 6 in the top 10 lists from Europe

Most Liveable City in 2022: Vienna, the capital of Austria, is the most livable city in the world. The Australian city of Auckland has dropped to 34th place after being hit by the Corona pandemic restrictions. 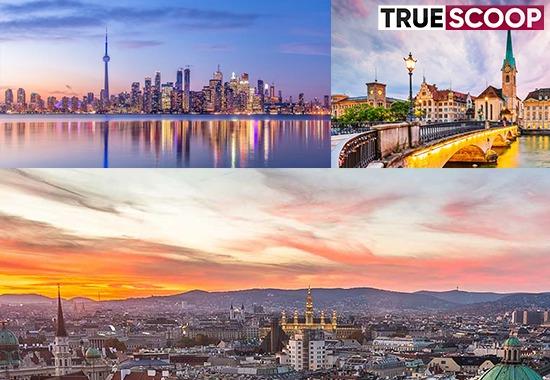 Most Liveable City in 2022: Vienna, the capital of Austria, is the most livable city in the world. The Australian city of Auckland has dropped to 34th place after being hit by the Corona pandemic restrictions. Unexpectedly Vienna rose to the top. Also this year, the Syrian capital Damascus became the least livable city on the planet. The Global Livability Index takes into account the challenges a person faces across 173 cities.
The report said that Vienna, which dropped to 12th place in the rankings in early 2021 due to the closure of museums and restaurants due to Corona, has returned to the top by 2018 and 2019. Copenhagen, the capital of Denmark, is in second place, followed by Vienna, Zurich, Switzerland and Calgary, Canada.
The Global Liveability Index surveyed and evaluated cities in the categories of sustainability, health care, culture and environment, education and infrastructure. Take a look at the top 10 most livable cities in the world according to the Global Liveability Index.
Most liveable city 2022
No. 10: Osaka, Japan and Melbourne, Australia |
The Japanese city of Osaka is ranked 10th due to its consistently high stability score. Australia's Melbourne also shared 10th place on the Global Liveable Index with Osaka due to its educational institutions and infrastructure.
No. 9: Amsterdam, Netherlands |
Amsterdam, the capital of the Netherlands, has many tourist attractions such as historic canals, the Van Gogh Museum, the Anne Frank House, the red-light district and the Rijksmuseum. The city of Amsterdam is full of parks and open spaces. It is well connected with transport facilities
Number 8: Toronto, Canada |
Toronto offers its residents world-class healthcare facilities and a healthy lifestyle. It has countless parks, trails and public infrastructure spread throughout the city.
No. 7: Frankfurt, Germany |
Frankfurt is the centre of commerce, culture, education and tourism. It is home to many cultural and educational institutions and hosts the largest book fair in the world. It has two large botanical gardens and a network of cycle routes. About 50 per cent of Frankfurt's city limits are protected green areas.
No. 6: Geneva, Switzerland |
Also known as the Peace Capital, Switzerland's Geneva is an important financial centre in the world and a centre of international diplomacy. It is also home to organizations such as the United Nations and the Red Cross. It has wonderful cultural institutions including an extensive public transport network, sustainable development and environmental protection schemes
Number 5: Vancouver, Canada |
Vancouver, located in British Columbia, Canada, is one of the cleanest cities in the world. It has excellent environmental sustainability, design, education infrastructure and affordability that push it higher in the ranking of sustainability.
No. 4: Calgary, Canada |
Calgary boasts a spectacular skyline at the foothills of the majestic Rocky Mountains and is home to world-class libraries and infrastructure. These make a difference in its international profile and it ranks high on the list.
Also Read: Karachi amongst world's worst cities to live in
No. 3: Zurich, Switzerland |
Zurich, the largest city in Switzerland, has the largest financial centres in the world. The city is packed with multiple modes of transportation and has scored high in work, housing, leisure, education, and safety.
No. 2: Copenhagen, Denmark |
Copenhagen, the capital of Denmark, secured the second position on the list. The city has ranked highly on the Global Liveability Index over the years due to factors such as excellent infrastructure, reliable transportation systems and a high level of healthcare.
No. 1: Vienna, Austria |
Vienna returned as the world's most livable city in 2022. Good sustainability and infrastructure are the main attractions of the city-backed by good healthcare and plenty of opportunities for culture and entertainment.