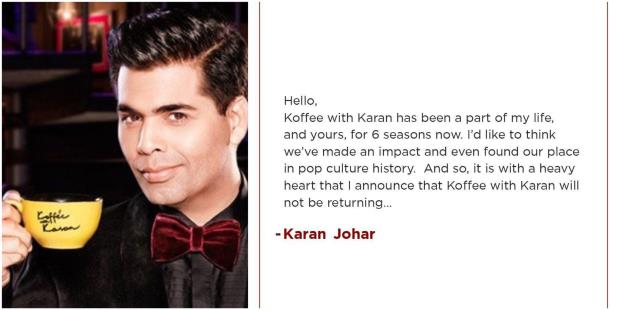 Karan Johar Koffee With Karan: A few days ago it was discussed that Karan Johar's popular chat show 'Koffee With Karan' will be streamed soon. The hosts will start shooting for it in May.
But now some other news is coming out, hearing which the fans can get a big shock. Karan Johar himself has made a big announcement about this and through his social media has given a shock to the near and dear ones. He has said that now this show will not make a comeback.
New information about 'Koffee With Karan' Karan Johar has told that his popular talk show 'Koffee With Karan' will no longer come. This information has been given by the host of the show himself. A note has been shared on the Instagram post with an important announcement caption.
In which it is written, 'The 6 seasons of Koffee with Karan have been an important part of my and your life. I feel like we've made a huge impact with this show and found a place for ourselves in pop culture history. But now I feel very sad to say that Koffee With Karan is not returning now.
'Koffee with Karan' is no longer returning Koffee With Karan is a chit-chat show, where Bollywood celebs come and Karan Johar talks to them and they share some sour and sweet memories.
Also Read: Shehnaaz Gill close 'Kiss & Hug' to Salman Khan at Arpita Khan's Eid Bash, says 'Ghar Chodh ke Aao'
However, there was no discussion of the show not coming far and wide. On the contrary, it was going in the news that Karan Johar will start shooting for his next season in May. But now he has made it clear that his show which has been coming continuously for 6 years is not returning now.
According to media reports, Karan is currently shooting for 'Rocky Aur Rani Ki Prem Kahani' with Alia Bhatt and Ranveer Singh. And in May, he will shoot a major part of the film. Well, the show premiered on Star World on November 19, 2004, and its last episode was telecasted on March 17, 2019.