Kotkapura shootout: Sukhbir Badal does not appears before SIT; summoned again on September 14

According to SIT, police authorities sent a courier to summon Sukhbir Badal. No one took the summons. 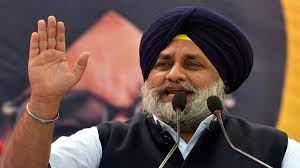 Former Deputy CM of Punjab Sukhbir Badal did not appear before the Special Investigation Team (SIT). He was called in for questioning about the Kotkapura shooting incident. Sukhbir Badal was asked to appear at 10.30 am on Tuesday. Sukhbir Badal showed up at Zira Court rather than coming to Chandigarh. Sukhbir Badal said that he did not get any summons.

In this case, the Special Investigation Team has now appeared. According to SIT, police authorities sent a courier to summon Sukhbir Badal. No one took the summons. SIT was told that Sukhbir Badal was abroad. After this, the SIT also summoned Vineet Pal Happy, who lives with Sukhbir Badal, on WhatsApp. Who even admitted to receiving the summons.

The Kotkapura shooting incident is in the year 2015. At that moment, shots were fired at Sikh protestors who were denouncing Sri Guru Granth Sahib's sacrilege. When this shooting occurred, Sukhbir Badal was the deputy chief minister of Punjab. He also had the Home Department. Who gave the orders to start firing on the Sikhs, the SIT want to know? In this case, Sumedh Saini, the then-DGP, has also been questioned.

Sukhbir Badal has also replied that the SDM has given orders to shoot. The SDM has also given in writing about this. The SDM is still standing by his point. Sukhbir had also spoken about not getting the summons. However, he also said that thousands of such summons come in a case, there is no big deal in it.