In the boomerang video, Nupur holds a pair of scissors and a spray bottle of water even as Kriti gestures with her fingers to suggest a haircut 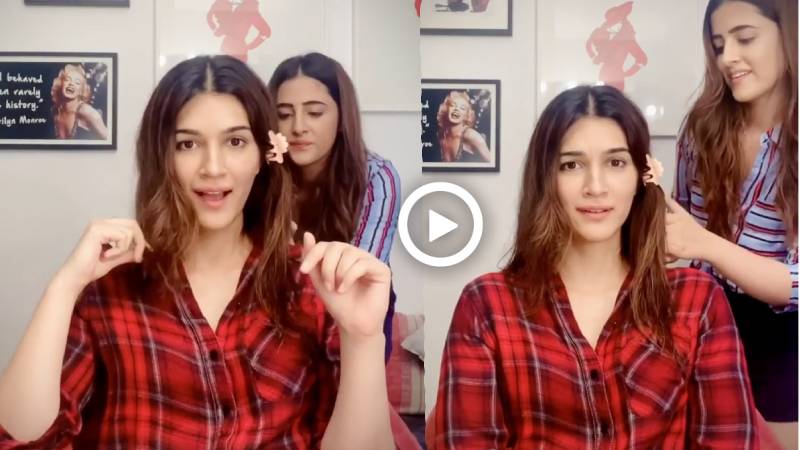 Actress Kriti Sanon got a "quarantine cut" from her sister, singer Nupur Sanon, amid lockdown.
Kriti took to Instagram Stories, where she shared a boomerang video and a pictures of herself along with Nupur.
In the boomerang video, Nupur holds a pair of scissors and a spray bottle of water even as Kriti gestures with her fingers to suggest a haircut.
With a "quarantine cut" sticker on the image, Kriti wrote: "Lets do this!!! @nupursanon."
In the second image, Nupur is seen chopping Kriti's long tresses even as the actress seems nervous.
"Wait for it a lil longer... Gonna post the look tomorrow," she wrote.
On the work front, Kriti will next be seen in "Mimi", directed by Laxman Utekar. The film is a remake of the National Award-winning 2011 Marathi film "Mala Aai Vhhaychay".
Watch Video:
Also Read: Urvashi Rautela's dance on Shakira's 'Hips Don't Lie' is a treat to watch. Video

View this post on Instagram
Baal baal bach gaye... 💇🏻‍♀️ Watch it till the end to see for yourself! Have never ever gone this short! And I Love It!!!😍❤️💃🏻💃🏻 Thank you @nupursanon for such a refreshing cut💞💞 P.S. You did scare me with your goofy wicked smile and the fact that u were constantly moving your booty on the punjabi tracks while you had my precious tresses in your hand! 🤪😂 #LockdownWithTheSanonSisters #TheSanonSisters
A post shared by Kriti (@kritisanon) on May 20, 2020 at 11:23pm PDT