Krushna Abhishek, furious after tripping and falling on the TKSS stage in his saree, warns Kapil Sharma

Krushna Abhishek angry after tripping on the TKSS stage while wearing a saree and gave a harsh warning to Kapil Sharma. 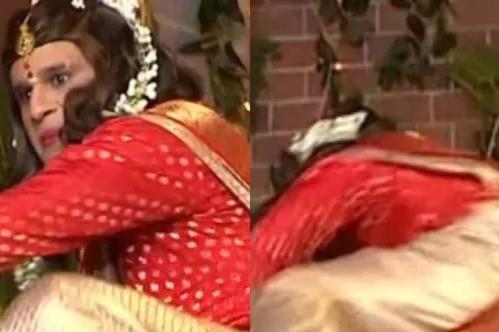 Comedian Krushna Abhishek has always tickled the funny bone of the audience with his entertaining performances on The Kapil Sharma Show. When the RRR crew, which included SS Rajamouli, Alia Bhatt, Jr NTR, and Ram Charan, captivated the audience, everyone fell out of their seats once again. When he stumbled on the platform while wearing a sari, he grew upset with Kapil Sharma and delivered a severe warning to the host pressuring him to perform things he would probably never do in his life.
Instead of the normal skirt worn by his famous character Sapna on the programme, Krushna wore a saree.
“I’m not sure what costume they gave me”, he said ."I’m stuck in this," Krushna continued as he walked on the stage. “You must know I have that big frock," he told the guests. “ But they gave it to me today just for you.”
Krushna stumbled and collapsed on the floor as he sprinted into the wings after completing his part on the programme. He stepped up in front of the visitors and stated to Kapil , “Agli baar saree mat pehnana mere ko (Don’t make me wear a saree again)." He tied the saree around his ankles and moved away gingerly while the audience laughed out loud.
Krushna also made light of his dispute with Govinda, his Chi Chi mom, throughout the performance. After making a joke about Govinda, Kapil asked Krushna a question.
Also Read : Jr NTR discusses favourite memory with his fans on 'The Kapil Sharma Show'
“What kind of things are you saying? What will they think about you?” Krushna quickly replied , “Jiska mama uske baare me nahi sochta, yeh kya sochenge!" (Why would these people care about someone whose uncle himself doesn’t care about him)!”
For many years, Krushna has been a fixture on Kapil Sharma's programme. Sapna, his persona, has become a programme staple, liked by both guests and spectators. In a special episode of the programme in 2020, Krushna admitted that he was apprehensive to participate in the show because he did not want to crossdress. Kapil stated he ultimately persuaded him and convinced him to join the team.