Lock-Upp: 'TejRan' are back as Tejasswi join jailor Karan Kundrra as Warden in the show, 'Atyaachaar hoga'

Lock-Upp: Kangana Ranaut's reality shows Lock-Upp is slowly moving towards the finale. As the finale nears, there is a lot of bang in this show. 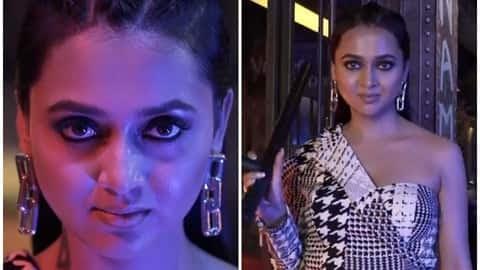 Lock-Upp: Kangana Ranaut's reality shows Lock-Upp is slowly moving towards the finale. As the finale nears, there is a lot of bang in this show.
Recently, Poonam Pandey's leaf has been cut from the Lock-Upp and now everyone is desperate to know which contestant will Kangana Ranaut hand over the winner's trophy?
Meanwhile, the makers have released a banging promo of Lock-Upp, in which TV actress Tejasswi Prakash is seen. With the promo, it has been revealed that the warden of the lock up will be none other than the Naagin 6 actress.
A new twist will come in
Lock-Upp After watching the new promo of Lock-Upp, you will be desperate to see the new twist coming in Kangana Ranaut's show. It is shown in the promo that Tejasswi Prakash takes entry in a stylish style inside the Lock-Upp.
After this, she takes the names of the current contestants in the show one by one and says who will be poisoned now? It is clear from this promo that along with the entry of Tejasswi Prakash, the Lock-Upp must have eliminated one or the other.
Also Read: Lock-Upp: Who will Join Karan Kundrra as Jail Warden, Shehnaaz or Rubina? 'Pta Chal Jaayega': Fans
Confusion regarding Rubina-Shehnaaz
Recently, a video from outside the set of Lock-Upp surfaced, in which a glimpse of an actress was seen. After watching the video, people were speculating that either Rubina Dilaik will become warden or Shehnaaz Gill in Kangana Ranaut's show.
With the new promo of Lock-Upp, it has been revealed that the warden of Lock-Upp is none other than Tejasswi Prakash, the winner of Bigg Boss 15.