Protesters gathered outside the Police Commissioner's office and raised slogans against the MLA and the Aam Aadmi Party government. 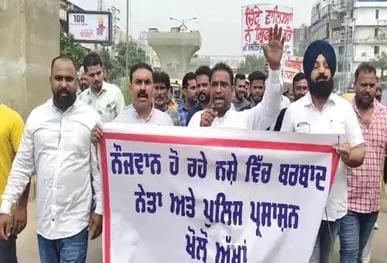 People of Jawahar Nagar Camp have opened a front against Aam Aadmi Party MLA Gurpreet Gogi from Ludhiana district of Punjab. Today, protesters gathered outside the Police Commissioner's office and raised slogans against the MLA and the Aam Aadmi Party government.  People allege that at the behest of MLA Gogi, drugs are being sold in their area.

The residents of the area and SAD leaders today asked the commissioner to send police teams with them, they themselves would get the drug smugglers caught. A local resident said that he staged a sit-in in opposition to MLA Gogi because Gogi had pledged not to permit the sale of drugs in Halka Paschim. In Jawahar Nagar Camp, Haibowal, Jain Colony, and Ghumar Mandi, drugs are also openly sold. The AAP government is unable to apprehend drug dealers. Gogi opened the local liquor shops that SAD had closed.

On the other hand, MLA Gurpreet Gogi said that it is easy to make allegations, but difficult to prove. Whatever claims are made, they are baseless. Gogi called ACP Harish Bahl and issued strong orders for the arrest of drug traffickers. At the same time, the liquor shops that are opening in the area will be closed. In this matter, he will meet with the Excise Department. He said that  ACP Harish Behl informed him over the phone that just 10 to 20 Akali Dal members were engaged in the anti-drug protests.

Balwinder Dulgach, the leader of the SAD, questioned how the MLAs would know how much drug is being sold where if they do not come out of their homes. The police are trying to apprehend the smugglers, but political pressure is making it difficult for them to do so. The legislators of the government are also suppressing the police. In the last few months, 5 to 6 people have also died due to drugs in the area.