Ludhiana: ADGP Praveen Sinha takes a security check of the city's churches and other religious places

The purpose of today's visit was to observe the city's security measures in light of the event that occurred in Tarn Taran two days ago. 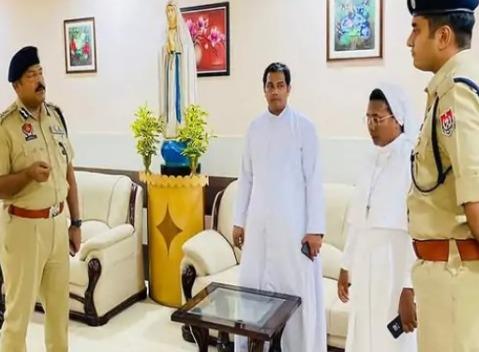 Today, ADGP Praveen Sinha went exclusively to Ludhiana. Sinha visited several religious places in the city. ADGP Praveen also saw CCTV systems installed at religious places. The purpose of today's visit was to observe the city's security measures in light of the event that occurred in Tarn Taran two days ago. Additionally, a flag march in the city was conducted by more than 100 employees.

Giving information, ADGP Sinha said that in addition to the police, it is the citizens' duty to assist the police in maintaining the safety of the city. Anyone who spots a suspicious person should call the police right away. Police will deal strictly with mischievous people. Those who commit crimes like Tarn Taran will not be spared under any circumstances.

Sinha said that all religious organizations' managers were tasked with maintaining the security of their CCTV systems. Get the cameras installed in places where most of the public comes. Every place of worship must have cameras installed at the entrance and exit points. Better cameras should be used so that it is possible to see the faces of persons entering and exiting as well as the case numbers of the vehicles.