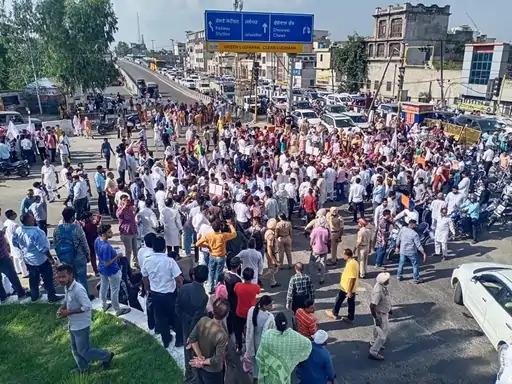 In response to the vandalism that took place days back at a church in the Tarn Taran district of Punjab, the people from Christian society launched a protest march demanding the arrest of those behind the incident.

The protestors during their march forced the shopkeepers to shut down their shops and launched a jam at the Jagrao flyover.

It is pertinent to mention that the event that led to the protest was captured in a CCTV camera where 4 youths entered the church premises and vandalized the statue of Jesus Christ and Mother Marry, besides demolishing the church property.

In a separate incident, a group of over 150 Nihang disrupted the ongoing event of the Christian community which the former alleged were making the illegal conversion.

The investigation in the Tarn Taran incident is underway by the SIT headed by IGP Ferozepur range including the SSP of Tarn Taran and the SP who is also the investigating officer.