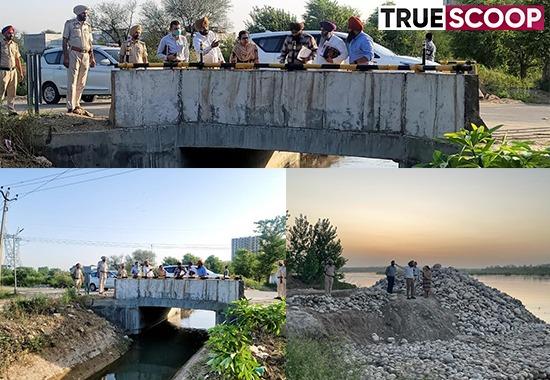 Deputy Commissioner Ludhiana Surabhi Malik along with other officials on Thursday evening conducted a whirlwind tour of the flood-prone areas in the district wherein she reviewed the ongoing flood protection works ahead of the forthcoming monsoon season.

Taking stock of the preparedness of the district administration, the DC visited areas alongside Sidhwan canal, Dakha Rajwaha in village Saroh, Kailpur Waraich, Bhattian and reviewed the cleanliness works being executed by the irrigation department. Thereafter, she also visited the areas alongside Buddha Nullah and Khairabait complex where flood protection works were going ahead in full swing besides inspecting the Dhussi Bandh.

The DC reviewed the precautionary measures being taken to prevent floods during the forthcoming monsoon season and directed the authorities to complete the flood protection works before the onset of rains so that the people would not face any problem.

Apart from this, she also inspected the strengthening works carried out at Dhussi Bandh on the banks of river Sutlej at key points to avoid erosion of land. Officials from drainage departments have informed the DC that all the on-going works would be completed before the arrival of monsoon.

The DC, meanwhile, said the district administration has done precautionary arrangements for the prevention of floods so that people would not face any harm. She said the Drainage Department has been directed to complete the work of cleaning the drains in a timely manner besides strengthening the critical areas.

The deputy commissioner also said that all departments have been directed to keep ‘Flood Protection Action Plan 2022’ and ‘District Disaster Management Plan 2022’ updated to prevent possible flood-like situations, adding that a 24X7 flood control room has already been set up at the district administrative complex to keep a close tab over the situation.
Also Read: Ludhiana: Inauguration of 37 new OOAT clinics, Urges citizens to eliminate drug abuse from society
She categorically said that any kind of negligence in this task would be highly unwarranted; thereby all the departments concerned must put concerned and coordinated efforts to keep the city from flood-like situation during monsoon.