Reportedly, a case was also registered against parents and other people for creating ruckus in school premises. Author : Guneet kaur 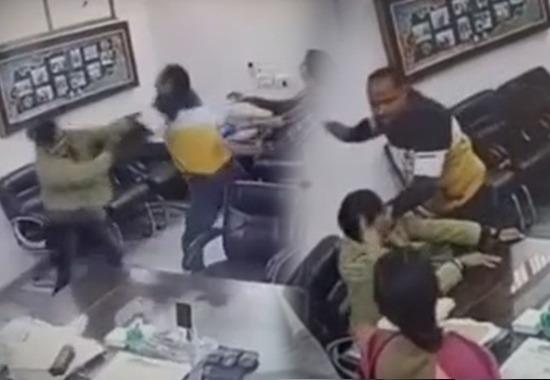 As per latest information received from Ludhiana, a fight broke out between school staff and parents over matter of depositing fees. The uproar was up to such a level that police had to be called in order to pacify the situation. Reportedly, a case was also registered against parents and other people for creating ruckus in school premises. Whole incident was captured on CCTV installed.

Speaking about the incident, it was revealed that accused was identified as Vijay Chauhan who got into a verbal spat with school clerk Sukhwinder Singh. This verbal spat in no time soon turned into a physical fight after which police were called. As per information, incident reported is from Shaligram Jain Public Senior Secondary School, Dana Mandi. Principal of school revealed that Vijay Chauhan had to deposit fees of Rs. 2 lakhs to school for which he had come to meet Principal. Vijay Chauhan during his meeting with Principal alleged that clerk demanding fees from them spoke very rudely to him over phone after which he was also called in office. While parent and clerk were speaking to each other, parents suddenly got up and started slapping the clerk.

As the situation got worse, Principal called staff of school but fight rose to such an extent that parent pushed the Principal as well. The whole incident was captured in the CCTV installed inside office, after which Salem Tabari police station registered a case against the accused Vijay Chauhan and other persons.

Accused Vijay Chauhan in his defense stated that he had due fees to be paid amounting to Rs 1 lakh 45 thousand. He alleged that when Sukhwinder Singh called him in same regard, he spoke very rudely. Not only this, he further stated that clerk also interacted with his children in a very bad manner for which police should take action against Sukhwinder Singh as well.