Some international numbers are also included in the WhatsApp groups in which this entire planning took place. 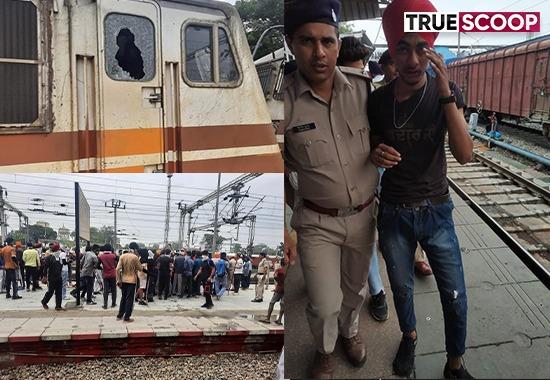 The sabotage on Saturday against the new scheme 'Agneepath' for army recruitment at Ludhiana railway station was part of a well thought out planning. Some people planned this nuisance and then a crowd was gathered in Ludhiana by messaging in different WhatsApp groups. After this the mob was instructed to vandalize. Some international numbers are also included in the WhatsApp groups in which this entire planning took place.
All this information has come to the fore in the initial investigation of Ludhiana Police. Ludhiana Police has arrested some accomplices of youths involved in the sabotage on Saturday. Ludhiana GRP police also caught 6 youths on the basis of CCTV footage installed at the railway station. A case has been registered against these 6 under sections 148 149, 353,186, 427 of IPC.
Out of the arrested accused, 3 youths are from Ludhiana, 2 from Moga and 1 from Ropar. On Saturday, these youths from different districts of Punjab gathered near Bharat Nagar Chowk. They have been identified as Harmesh Singh, Kuljinder Singh, Harmanpreet Singh, Kuljeet Singh, Manpreet Singh, Sukhpreet Singh. Ludhiana Police Commissioner Kaustubh Sharma himself studied the chats of these youths in WhatsApp groups made in mobile phones.
Also Read: Police arrest protesters who blocked PAP chowk in Jalandhar following 'Agnipath' protest; Watch Video
According to Ravcharan Brar, Joint Commissioner of Police, Ludhiana, there is a well-planned conspiracy behind this incident. This sabotage was done with complete planning. In some WhatsApp groups, youth were asked to join. Ludhiana Police Commissioner Kaustubh Sharma himself has studied these groups in the mobile phones of the arrested youths.
Police is also scanning what instructions were given in these groups before and after the demolition. Meanwhile, on Saturday late evening, the Ludhiana Police registered a case against unknown people under several sections for causing damage to public property have done.
Ludhiana Police Commissioner Kaustubh Sharma said that the mobile phones of the youths who were apprehended by the police were taken for investigation. He himself studied those WhatsApp groups in the mobile phones of these youths for 3 hours, in which these youths were asked to assemble in Ludhiana.
According to CP, there are some international numbers in these WhatsApp groups which have nothing to do with army recruitment. These numbers are being specifically scrutinized. Every movement of the group is being monitored. Mischievous people sitting abroad can do the work of instigating the youth, so investigation is going on from every angle. CP Sharma told that there are some numbers which are now on the radar of the police.
When the police commissioner himself saw the chat of the last several hours on his mobile phone, the youths who have been caught by the police in this nuisance, it became clear that this attack was not a sudden incident but there was a whole plan behind it. The attackers were properly instigated and deposited in Ludhiana from different cities. After this, the mob was instructed to vandalize the railway station and Ghantaghar road in Ludhiana city.