Trinamool Congress chief Mamata Banerjee is at the centre of attention in Delhi with leaders queuing up to meet her during her visit to Delhi and three prominent politicians joined the party including one Congressman, one former Congress and a JDU leader. 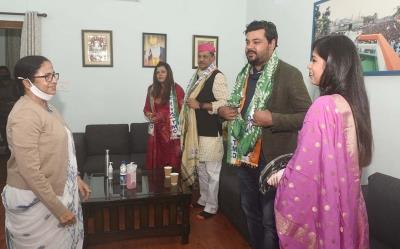 Trinamool Congress chief Mamata Banerjee is at the centre of attention in Delhi with leaders queuing up to meet her during her visit to Delhi and three prominent politicians joined the party including one Congressman, one former Congress and a JDU leader.

The arrival of Banerjee in Delhi has created furore in the Congress with the grand old party guessing who could be the next.

Kirti Azad, Ashok Tanwar and Pawan Varma all three are former parliamentarians with diverse background, who joined Trinamool on Tuesday. Azad, a former cricketer and a former BJP MP who switched to Congress is now a TMC party member. Azad was feeling sidelined in the party and so decided to quit. He fought the Lok Sabha polls on a Congress ticket, but could not win. He was earlier with the BJP, but left after differences with the leadership. Azad's wife is also active in Delhi politics.

Sources have said, Congress leaders who are not happy with the party leadership are founding refuge in Trinamool as poll strategist Prashant Kishor has been playing the role of a facilitator for the new comers to join Trinamool. Kishor has been in fact approaching the leaders personally, sources said.

Earlier, both Sushmita Dev from Assam and Luizinho Faleiro from Goa, who joined the Trinamool Congress recently, were considered close to the Gandhi family. It was Faleiro who publicly said that he was approached by none other than Kishor and his team to join the Banerjee-led Trinmool Congress.

After winning the elections in West Bengal, the Trinamool Congress is also trying to make an impact at the national stage now.

"We have to see who has got the power to face the current dispensation which is ruling in Delhi and Goa. Definitely, I will support Mamata because she has fought, she has succeeded... She symbolises women's empowerment which can bring this country back on the track of development and progress," Faleiro said, describing the Congress as a "divided house".

Now, the Congress, which was trying to protect its leaders from being poached by the BJP, needs to keep its guard active against the Trinamool as well.

Congress' Goa state in-charge Dinesh Gundu Rao had attacked Kishor and alleged that he is misguiding the TMC Chief. "What are their (TMC) intentions? They have just come here to help BJP. And I do not know whether Mamata didi knows or not. But the people who are running this IPAC (Kishor's outfit), they have a different agenda altogether I feel. They may be betraying even Mamata didi also," Rao claimed.

One of the Congress leaders said that Kishor is on a revenge spree to damage Congress but if few persons are leaving the party, it is not likely to affect Congress. The revenge is used as Kishor was likely to join Congress but it was stalled by the leaders in the party