Rahul Vaidya and Disha Parmar are all set to tie get married. Rahul recently shares a short clip of ‘Mathe Te Chamkan’ song with his fans. 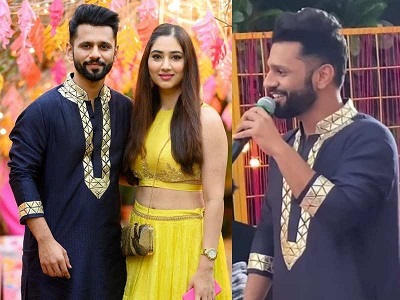 As Rahul Vaidya’s and Disha Parmar’s wedding is around the corner, The other thing which is in trend nowadays for celebs is making their life’s special day rather special and memorable by leaving something they are known for, just like this Rahul has created a song named “Matthe Te Chamkan".

Rahul has teased his fans by revealing the short clip of the song where he has seen singing on the mic in a studio. The Dishul’s wedding song is a love ballad. In the video, Rahul is seen recording in a studio, “Khilti rahe muskaane, o tere mukhde pe”. He then goes on to say, “The Dishul wedding song out soon,” he sings. Now fans are eagerly waiting for the release of the song.

Meanwhile, the wedding preparations of the couple are in full swing. On Wednesday, they both shared videos and pics of mehendi function on their Instagram accounts. The couple was supposed to get married early this year but the lockdown postponed their plans. The wedding is going to be an intimate affair where only close family members and friends are invited. After the wedding, there will be a reception party on 17th July.

Rahul Vaidya also spoke about their honeymoon plans in an interview. He reveals that they do not have anything planned as yet. The singer has been busy with back-to-back work, as he participated in Khatron Ke Khiladi post BB14. Having got really less time to prep for the big day, he is concentrating on the Dishul wedding song as well.