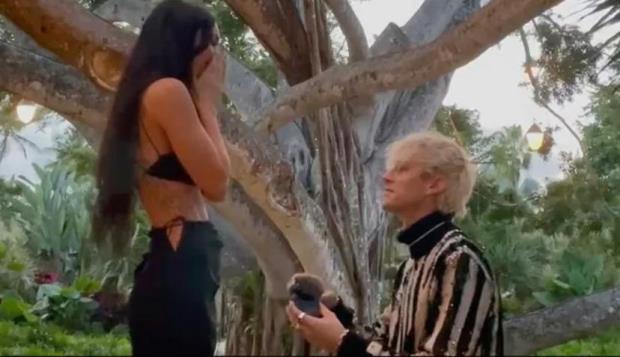 Popular American actress and model Megan Fox is engaged to her boyfriend Machine Gun Kelly. Megan Fox has shared a romantic video of her engagement with Gun Kelly on social media. In this video, Gun Kelly is seen sitting on his knee at a very beautiful location. Gun Kelly proposes to Megan under the same banyan tree where the two fell in love.
Gun Kelly Proposed Me For Marriage And I Said Yes!
Megan Fox shared this romantic video and wrote, "In July 2020 we were sitting under this banyan tree. We asked for magic. We were oblivious to the pain that we will face together in such a short time. Work and Sacrifice Unaware of what the relationship needs from us, but we are intoxicated in love.
Somehow after a year and a half after hanging out in hell together. And after laughing more than I thought he proposed to me for marriage, and I said yes. And then we drank each other’s blood - 1.11.22." This video of both is being liked by the fans and is also becoming quite viral on social media. Many celebs including fans commented on the video to Megan and Gun Kelly. Congratulations too.
Machine Gun Kelly himself designed the engagement ring for Megan Fox. Sharing the video of the engagement ring on social media, Gun Kelly wrote, "Yes, in this life and in every life, under the tree we fell in love with. Underneath that I took him again and asked him to marry him. I know the tradition is of one ring, but I designed 2 rings with Stephen Webster.
An Emerald which is his birth stone and Diamond which is my birth stone. Both the stones are attached in 2 magnetic bands, which are in the shape of thorns and are coming towards each other. These two souls make one heart, that is our love. 1-11-2022."