Canes flung but they didn’t move an inch. Read how the Mumbai police “managed” the crowd at the Lokmanya Tilak Terminus. 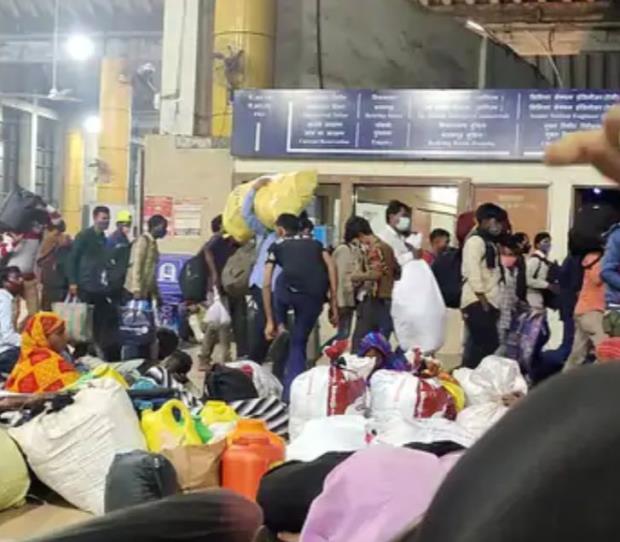 Amid the first wave of covid when a lockdown was imposed suddenly, we all vividly saw the merciless beatings of migrants who were trying to go home. But the change in the way of dealing with such activities is far from over. Now that the third wave is around the corner, Mumbai’s famous Lokmanya Tilak Terminus experienced a similar incident on Thursday when migrants from UP and Bihar were at the terminus awaiting the train to head back home.
The migrants were not able to get tickets back home and even though they were beaten black and blue, they refused to move an inch. The reason for such desperation appears to be clear amid the rising cases, it is feared that the city may go under lockdown not so late from now. Anticipation and anxiety about losing jobs and eventually the history getting repeated the migrants are left with no choice but to risk everything to head back home.
Also read: Telugu Star Mahesh Babu test Covid positive
Since Thursday night at 8, there were migrants with suitcases, rucksacks, and even buckets who started to proceed towards the station, desperate to head back home gathering at the station to catch the early morning train. One of them was quoted saying—that they will starve to death if they stay in Mumbai.
With no tickets, their plans were to get into the general compartment and if prompted by the TC they would pay the fine.
Above hunger and thirst, there was only one concern on the faces of the people. To return home without getting stuck in lockdown. As soon as they could catch a sigh of relief and finally sleep, the police came and started beating them black and blue with sticks and started shouting—"wake up, this is not your home.”