The hot sensation of the world Jennifer Aniston seems quite busy with her award-winning role as the bold and confident women Alex Levy from The Morning show season 2 in Los Angeles. Season 2 was initially scheduled for 2020 but due to Covid 19 restrictions the shoot was postponed. Now under strict safety measures, the team has begun shooting with full strength.

The 52-year-old actress often treats her million fans with fun behind the scenes photos and videos from the show and her adorable dog.

In her recent post Rachel of friends was seen dealing with a serious issue of ‘Monday Blues’ and it hits our cords as well. Mondays are very slouchy for each one of us so we all could quite relate with Jennifer. Lying inside a meeting room Aniston was seen sitting on an office chair, with one leg against the wall getting the real motivation to kick start the new week. In the caption she wrote, “And it’s only Monday”.

Although, it’s a Monday blue scenario still Jen has managed to slay her looks in an all-black outfit. The morning show actress can be seen wearing a turtle neck top, black jeans and pointed black heels and finally to complete the look she wore a thin-framed spectacles and a black sling purse lying on the table.

There’s not just this for fans, the actress shared another picture on her IG story. This time it’s her dog Clyde who seems to have the blues. Both of them were seen traveling inside the studio on a golf cart. Taking to her Instagram stories the actress wrote, “bring Clyde to work day @thenorningshow”. 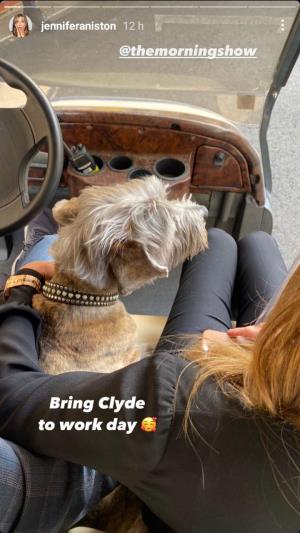