Moon Knight Latest Mini - MCU series: Release Date in India, When & Where to Watch All episodes; Know Everything

No matter what you're feeling like today, it's easy to watch Moon Night. Moon Knight episode 1 debuts on Disney Plus at on Wednesday, March 30. 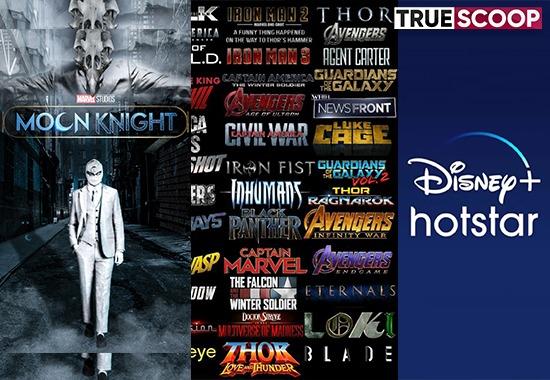 Marvel fans have been waiting for Moon Knight for a long time and now their wait is over. Moon Knight has knocked on Disney Plus Hotstar and a new hero has arrived in the world of superheroes. In this review, however, how sweet the fruit of waiting for the fans has proved to be.
What's the story:
The story of the Marvel series Moon Knight revolves around Steven Grant (Oscar Isaacs), who works in a museum gift shop. For the past few days, Steven feels like he is in a different place when he wakes up from sleep, so he has made all preparations to stop himself.
Like tying himself to the bed and laying sand near his bed, so that if he gets up from the bed, after waking up from sleep, he can know from the footprints that he was up.
One night Steven sleeps and wakes up when he is in a village, where some people are after him.
During that time Steven sees Arthur Harrow (Ethan Hawke) who judges people based on the sins they may have committed. Steven soon learns that Arthur needs a scarab, and Steven wants to give it to him, but Moon Knight/Khonshu (Egyptian God of Moon) doesn't allow it.
Actually Steven Grant, Mark Spector and Moon Knight are one and the same. Maya Calamawi plays a key role in helping Steven learn and help him discover Mark's identity.
Overall, this story is a battle between Moon Knight and Arthur Harrow, who have their own reasons to prove themselves right.
Also Read: RRR vs The Kashmir Files: Whose film is at top? Vivek Agnihotri's movie or South's megastars; Know their Collection
What's Special:
From the very beginning of the very first episode of Moon Knight, you will get excited for it, like breaking glass in shoes, laying sand near the bed and action happening in the blink of an eye. Arthur's scaling tattoo can also excite the audience.
We have all seen a lot of action in Marvel movies and series, but its action is also quite different. Moon Knight, Steven and Mark, the different style of all three makes the story more interesting.
Apart from the action, the VFX of Khonshu and Moon Knight is also very good. To say this is Marvel's new superhero, but it may be that after this series, it will become the favorite superhero of many viewers.
WATCH OR NOT:
The 6-episode Moon Knight has everything any Marvel fan could need. The series has a lot of action, edge in story and excellent VFX.
It would not be wrong to say about the series that this is the best series of Marvels so far and the audience will enjoy it a lot. So if you like Marvel's content, then you don't have a single reason not to watch it.
How to watch Moon Knight on Disney Plus
No matter what you're feeling like today, it's easy to watch Moon Night. Moon Knight episode 1 debuts on Disney Plus at on Wednesday, March 30.