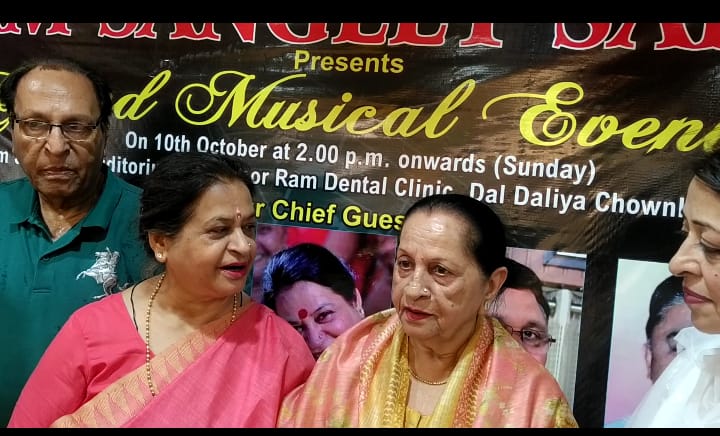 Music is an invaluable gift of God, given to the universe. It is a spiritual key that helps us in being mentally and physically fit. Dr. Surinder Kapila expressed these views during a music meeting organized by Ram Sangeet Sabha on October 10.

Referring to the Patiala gharana of music, Dr. Kapila said that music should be melodious, enjoyable and a guiding force rather than lewd or lecherous so that one can listen to it while sitting with family. He further added that such programs give a platform to new artists and play a significant role by taking forward the legacy of conventional music of the city.

Dr. Kapila said that music is a melodious and universal language that takes away our worries and provides us peace with such mind concentrating ragas. He further equated music with such rhythms that bring back memories of older times, favourite spots, positive thoughts and even people and festivals.

Ms. Daisy Walia, on this occasion, also expressed her commitment to music. She said, one feels good after listening to music and it calms the minds and hearts while providing happiness on the other hand. The secret to healthy and prosperous life is music which is a gift given to us by God. Music is regarded as a high aesthetic symbol that teaches us significant social skills. Music produces significant skills such as team work, leadership and discipline. It also teaches us how to be in relationship with people.

Mr. Rakesh Sharma, Mr. Bhagwan Das Gupta also expressed their views on this occasion. Dr. Ram Arora, President, Ram Sangeet Sabha, said that such congregations give platforms to budding artists. He added, such platforms also bring to fore talented artists who are interested in music but could not come forward due to some reasons.