Nancy Pelosy Taiwan visit reason: Why China is 'shivering' ahead of US' representative visit?

This is the first high-profile visit to Taiwan in over 25 years, in the nation of 24 million people, the island territory out rightly claimed by China. 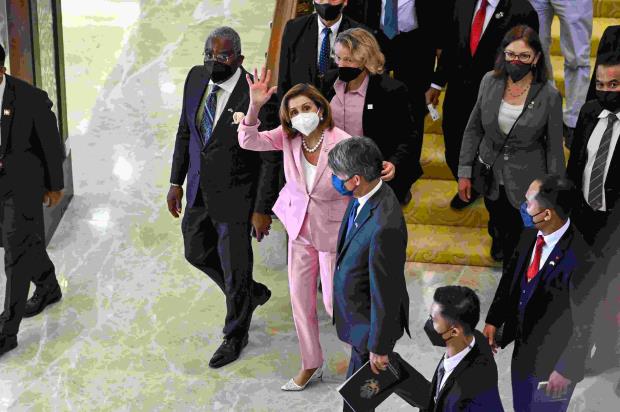 The US House Speaker Nancy Pelosi will be traveling to Taiwan on her multi-stop Asian tour to strengthen US interest in the region. This is the first high-profile visit to Taiwan in over 25 years, in the nation of 24 million people, the island territory out rightly claimed by China.
Beijing has eyebrows raised over Pelosi’s visit. The last time when a high-level official visited Taiwan was in 1977 when Newt Gingrich paid a visit after returning from Beijing. Pelosi’s visit is seen by many experts as a visit to potentially hype up the tensions already escalating between the two superpowers on military and diplomatic fronts.
China’s Taiwanese claim:
The People’s Republic of China claims its sovereignty over Taiwan, and the officials and supporters believe that the secession of Taiwan should be agreed upon by all 1.3 billion Chinese citizens instead of just the 23 million residents of Taiwan. The US House Speaker’s visit to Taiwan comes a day after Chinese President Xi Jinping’s conversation with President Biden over a phone call, warning the latter with countermeasures over Pelosi’s visit to Taiwan.
On Monday, the US House Speaker began her Asian tour with a visit to Singapore. She is also due to go to Malaysia, South Korea, and Japan. Pelosi’s public itinerary has made no mention of Taiwan, but a senior Taiwanese government official and a US official told CNN on Monday that she is expected to visit Taiwan and stay overnight as part of her tour of Asia. It is unclear when exactly Pelosi will land in Taipei.
Pelosi has commemorated the Tiananmen crackdown on several occasions. On the 33rd anniversary of the brutal military execution of mass, Pelosi has expressed her support for the activists and those dead. In a statement, Pelosi said, “activists on the mainland and throughout the region seeking to exercise their basic freedoms and rights" against the Chinese Communist Party’s “accelerating human rights abuses" of its citizens.
China warned the military action if Pelosi visited Taiwan:
As per the media reports, China has suspended imports from 35 Taiwanese exporters of biscuits and pastries since Monday, in a warning salvo to the self-governed island ahead of a potential visit to Taiwan by the US House of Representatives Speaker Nancy Pelosi. An editorial of the Chinese media also warned that if Pelosi's aircraft flew over China, the Chinese military would shoot it down.
The US in response to Chinese aggression:
Washington has asked Beijing to refrain from issuing statements against Pelosi’s Taiwan visit and to not indulge in any form of military provocation. The US added to the comment to Beijing that the visit will not be the first of its kind nor does it represent any sort of change in our stand towards the region.
In May this year, Biden urged the West to stand in solidarity against Russia’s aggression over Ukraine and to deter such Chinese intentions on Taiwan. Biden has firmly made his stand clear on US support to Taiwan against any form of invasion coming in from China to subjugate the island territory.
Also Read; China's uncontrolled 25-tonne rocket crashes down over Indian Ocean
Why is China opposing Pelosi’s visit?
Beijing has warned that Nancy Pelosi's visit to Taiwan would have “a severe negative impact on the political foundations of China-US relations. "Chinese foreign ministry spokesman Zhao Lijian was quoted as saying that it would be “a gross interference in China's internal affairs" if Pelosi visits Taiwan, and warned that it would lead to “very serious developments and consequences."
“We would like to tell the United States once again that China is standing by, the Chinese People’s Liberation Army (PLA) will never sit idly by, and China will take resolute responses and strong countermeasures to defend its sovereignty and territorial integrity," Zhao said on a regular daily briefing. Asked what kind of measures the PLA might take, Zhao said: “If she dares to go, then let us wait and see."
Taiwan gears up for Pelosi’s visit:
Taiwan on Tuesday, amidst escalating warnings coming from China, four US warships, including an aircraft carrier, were positioned in waters east of the island on "routine" deployments.
The carrier USS Ronald Reagan had transited the South China Sea and was currently in the Philippines Sea, east of Taiwan and the Philippines and south of Japan, a US Navy official confirmed.
The Japanese-based Reagan is operating with a guided missile cruiser, USS Antietam, and a destroyer, USS Higgins. "While they are able to respond to any eventuality, these are normal, routine deployments," the official said, an official related to the matter who wished not to be named, said media. The official added that they were unable to comment on precise locations.