Navjot Kaur said that Sidhu was the right choice for Punjab’s CM. 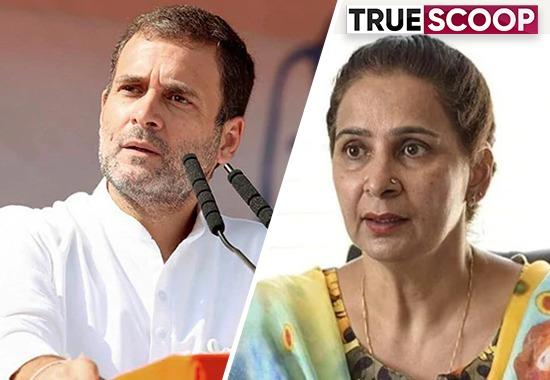 Respecting the sentiments of the Congress workers and people of Punjab, Congress leader Rahul Gandhi announced Charanjit Singh Channi as its Chief Ministerial face for Punjab on February 6.
There was a tussle between Navjot Singh Sidhu and Charanjit Singh Channi to be selected as the CM face. Finally, Congress came up with Channi’s name. The sole reason behind his selection was that the SC and ST community has taken the lion’s share of vote bank in Punjab, the Congress is pinning its hopes on Charanjit Singh Channi who belongs to the schedule caste community. The Congress has fielded him from two seats -- Chamkaur Sahib and Bhadaur -- in the state assembly polls.
The vote bank is the actual reason responsible for such a step.
Navjot Kaur Sidhu attacked Congress leader Rahul Gandhi in support of her husband. She said that Sidhu was the right choice for Punjab’s CM. On replying to the reporter, Navjot Kaur said, “Yes...education should be counted for choosing someone at such a high position. Navjot Sidhu would've been the right choice (for CM), irrespective of him being my husband."
Rahul Gandhi during his rally in Ludhiana stated that Punjab CM comes from a poor family. On being asked about this, Kaur said, “Channi is not poor... He is richer than us.”
Also read: Punjab Elections 2022: Channi’s visit to Divya Jyoti Sansthan, a part of election strategy?
The 2022 Punjab Legislative Assembly elections will be held in Punjab on 20 February 2022 to elect the 117 members of the 16th Assembly of the Punjab Legislative Assembly. The votes will be counted and the results will be declared on 10 March 2022.