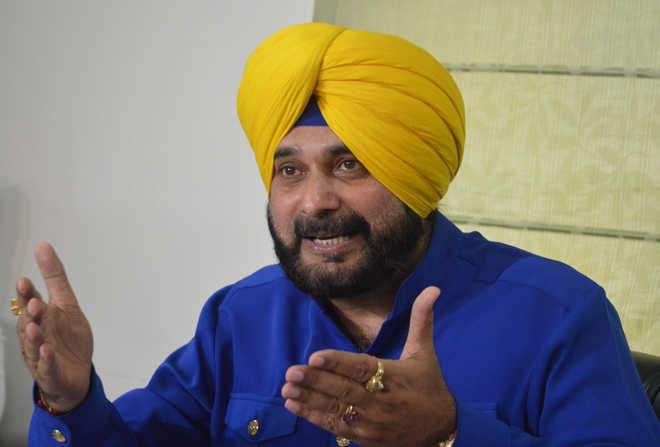 In his tweet, Sidhu said, “Is the sacrilege case not the top priority for the Home Minister? Evading responsibility & making only Advocate General (AG) a scapegoat means the Executive Authority has no supervisory control. Who controls the AG? Legal Team is just a pawn in this game of shifting responsibilities”. 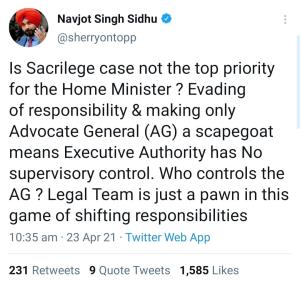 Meanwhile, this is the fifth such tweet in which cricketer-turned-politician Sidhu questioned the role of Congress Government and he earlier demanded that the report of the SIT of Punjab Police probing the sacrilege incidents of 2015 must be made public.

The SIT probe controversy started after the Punjab and Haryana High Court on April 9 quashed the investigation into the Kotkapur firing case and directed the state to constitute a new SIT without Vijay Pratap Singh.

Besides, this is the first time Navjot Sidhu has attacked Amarinder overtly and asked if the sacrilege case not the top priority for the Home Minister, and it is Punjab CM Capt Amarinder who holds the Home portfolio.

On Wednesday, Sidhu in his tweet blamed the “one person” for having colluded with the culprits, while sharing his old clips against the sacrilege issue. He, however, neither disclosed the name of the person, nor did he clarify about the culprits he was talking about.

His tweet reads, “Carefully crafted collusive abetment leading to ...हम तो डूबेंगे सनम, तुम्हें भी ले डूबेंगे I It is not a failure of the Govt or the party, but one person who is hand in glove with the culprits”.

Also, since the High Court quashed the SIT probe, Sidhu through his tweets has hinted that things are not smooth, saying: "When you keep your conscious mortgage, then no power matters."

Moreover, Sidhu's return to the Punjab Cabinet too hangs in balance as there is no indication from the Chief Minister of this happening, despite the efforts of the Congress leadership and the party's General Secretary in-charge of Punjab, Harish Rawat.