Nawazuddin Siddiqui recently stopped his bodyguards for not to push his well-wishers or his Fans, who want to take a picture with them. 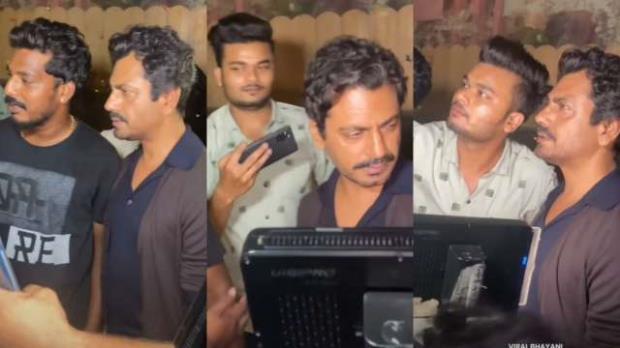 Nawazuddin Siddiqui recently stopped his bodyguards for not to push his well-wishers or his Fans, who want to take a picture with them. In this viral video, it can be seen said he was covered by his bodyguards for security purposes.
However, he avoided all that just to let his Fans take pictures of him. Seeing this sweet gesture, netizens have been calling him the most humble actor.
One of them wrote, “he’s a nice person and humble person.” The second person commented, “one of the finest actors we have.” The third person mentioned, “Y h original super Jante h audience yahi hi such Kuch.”
What Nawazuddin Siddiqui has said on RRR, KGF?
Bollywood actor Nawazuddin Siddiqui's film 'Heropanti-2' has been released in theatres on 29 April. The film has got only a 2.2 rating on IMDb and its first-day box office collection has been Rs 6 crore 50 lakh.
Also Read: Anjali Arora confesses her feelings for Munawar Faruqui despite mother's 'Warning'; 'Open your eyes'
The film 'Runway-34', which was released along with 'Heropanti-2', has also not got much good response on an opening day. On one hand, while South films are doing business of up to 50 crores on the release day itself, on the other hand, Bollywood films are not getting much good response at the box office. Nawazuddin Siddiqui gave his reaction to this difference.
Getting over-praised?
When Nawazuddin Siddiqui was asked whether there is insecurity in Bollywood about the box office figures with the way South films are dominating? In response, Nawazuddin Siddiqui said that when a film does well at the box office, everyone praises it more than it deserves.
A hit Bollywood film
'Sab Badal Degi' Nawazuddin Siddiqui said after the release of 'Heropanti 2', 'The same thing happens when a film doesn't do well. People start criticizing it as much as it doesn't deserve.
The Manto fame actor said that it has become a trend and it will change if a Bollywood film becomes a big hit at the box office. Talking about the work front, Nawazuddin Siddiqui has played the character of Laila in the film 'Heropanti-2', for which he is getting a lot of praise on one hand and the other hand he is also being criticized a lot. Tiger Shroff has played the lead role in this film directed by Ahmed Khan and Tara Sutaria is seen in the female lead role.