Archana replaced the cricketer-politician on The Kapil Sharma show.

Navjot Singh Sidhu left 'The Kapil Sharma Show' sometime back as he had to focus on his political career. Since then Sidhu is very active in Punjab Politics. However, on Tuesday, Sidhu resigned from the post of Punjab Congress president. Based on this and presenting it as an opportunity for Archana Puran Singh, people have created a lot of memes on social media.

Sharing funny posts on the micro-blogging site, people joked about how he might return to the chat show and take back his position. They also shared memes about Archana and imagined her funny reaction to the news.

Meanwhile, the actor herself took to Instagram and posted a compilation of some of the best memes. One of the memes Singh shared had a Twitter user saying, “Archana Puran Singh is more tensed than Rahul Gandhi right now.”  Singh shared all the memes on Instagram with the caption, “I Meme Myself. Kissa Kursi Ka #imememyself #memes #navjotsinghsidhu #archanapuransingh #funnymemes #thekapilsharmashow #humour.”

Have a look at some of the memes that have taken over the internet.

One user wrote, "After Navjot Sidhu's resignation from Punjab CONGRESS, the only person who seems to be highly upset is ARCHANA PURAN SINGH in Kapil Sharma show ....." 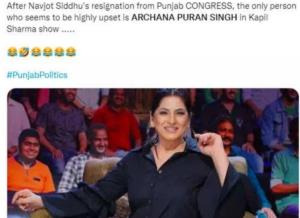 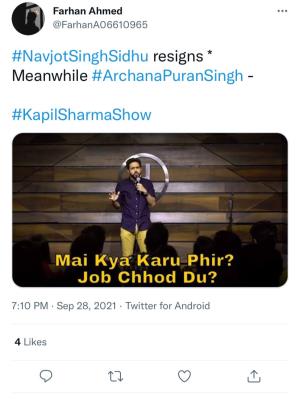 Several others joked about how Archana must be the most worried and tense now besides Congress. A user shared a picture with the caption, "Career sankat mein hai." 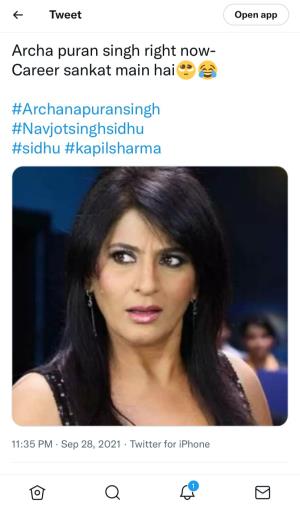 Also read: Trolls show no mercy to Navjot Sidhu after he tenders resignation as PPCC chief

Another user shared, "#NavjotSidhu leaves #Congress and everybody hoping he joins #KapilSharmaShow back !! Le *Archana Puran Singh*," along with a meme that read, "Apko hamari peeda ka andaza nahi hai"