Although the Audi Q7 facelift price will be announced on the day of its launch i.e. on February 3, many prominent media outlets have shared their expected price of the premium car. 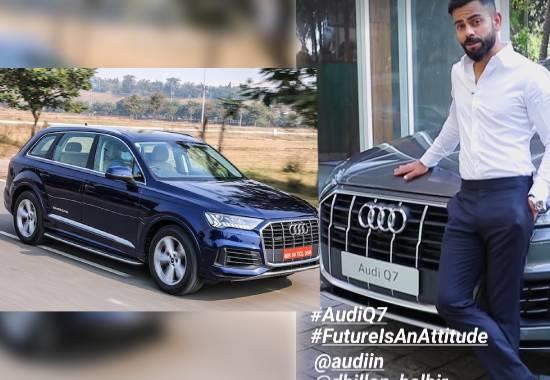 Audi is all set to launch its Q7 facelift SUV in India on February 3. As per reports, the Audi Q7 is returning to India with a single petrol BS6 engine, exterior and interior updates and the signature tech laded Audi experience. It will compete directly with the BMW X5, Mercedes-Benz GLE, Volvo XC90, and the Land Rover Discovery. To be offered in a single variant - the Audi Q7 55 TFSI.
The German carmaker will announce the price of the Audi Q7 facelift on February 3. It is pertinent to mention here that it is the second of the Q series SUVs to be launched by Audi within the last five months after it reintroduced the Q5 in October last year. Celebrities like Virat Kohli and Hrithik Roshan have shared a video on their social media of the upcoming Audi Q7 facelift and prepared India to welcome its arrival. Team India cricketer Virat Kohli who is also the brand ambassador of Audi, shared a commercial video in which he said, "Legendary performance and cutting edge technology are you ready for the new Audi Q7? Arriving in India on 3rd February"
Ahead of its launch, potential buyers are querying what might be the Audi Q7 facelift price in India will be? To those who are wondering about Audi Q7 facelift price in India, continue reading:
Audi Q7 Facelift price in India
Although the Audi Q7 facelift price will be announced on the day of its launch i.e. on February 3, many prominent media outlets have shared their expected price of the premium car. As per HT Auto, the Audi Q7 facelift starting price is expected to be at Rs 80 lakhs.
Also Read: New range of Philips audio products now in India
2022 New Audi Q7 specifications
The new Audi Q7 specification will offer several changes compared to the predecessor. The most significant change of the new Audi Q7 is under the hood, where the Q7 facelift now gets a BS 6 compatible engine to meet emission norms. At its heart, the new Q7 now gets a 3.0-litre V6 turbocharged petrol engine, mated to an eight-speed automatic transmission. It is pertinent to mention here that Audi will not offer any diesel variant for Q7, just like the Q5 facelift.
Despite being an XUV, the Audi Q7 does not disappoint speed lovers as it comes with standard Quattro all-wheel-drive system, is capable of churning out 340 hp of maximum power and 500 Nm of peak torque. It can accelerate from zero to 100 kmph in about six seconds and has a top speed of 250 kmph. Just like Audi Q5, the 2022 Q7 Suv will offer two trims-  Premium Plus and Technology. The latter is the top-spec variant loaded with more features.