Reportedly, simultaneous raids were also carried out at the offices of a local NGO called 'Athroat' 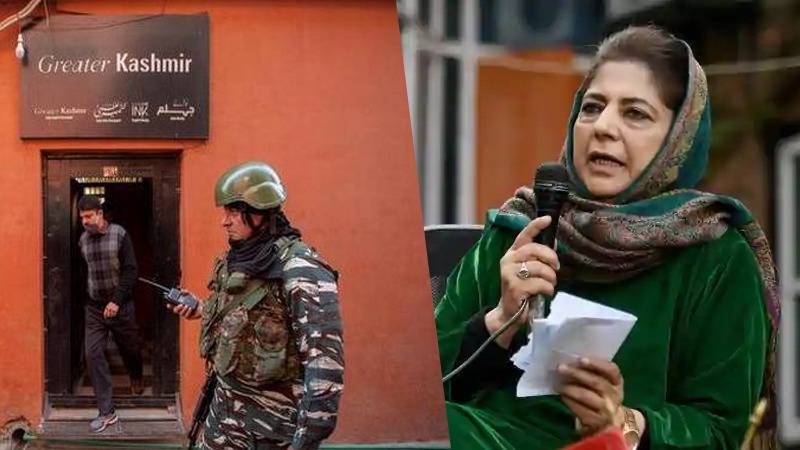 The National Investigation Agency (NIA) on Wednesday raided multiple places in Srinagar city of Jammu and Kashmir, including the office of a prominent English daily newspaper 'Greater Kashmir' as part of its ongoing investigation into the terror funding case.

However, this impromptu action taken by NIA has not gone well with Peoples Democratic Party Chief Mehbooba Mufti and she took a dig at BJP and termed NIA as BJP's pet agency which is being used to "intimidate and browbeat those who refuse to fall in line."

Taking it to Twitter Mufti wrote, "NIA raids on human rights activist Khurram Parvez & Greater Kashmir office in Srinagar is yet another example of GOIs vicious crackdown on freedom of expression & dissent. Sadly, NIA has become BJPs pet agency to intimidate & browbeat those who refuse to fall in line."

Assisted by local police and paramilitary troopers of the Central Reserve Police Forces, the raids were conducted in the office of 'Greater Kashmir' on the Residency Road area. This move comes a day after the Centre passed new land laws for Jammu and Kashmir.

"At a time when J&K’s land & resources are being plundered, GOI wants media publications to write op-eds about diabetes & yoga. In BJP’s ‘all is well’ charade, truth is the biggest casualty. Any journalist unwilling to become a part of Godi media is targeted," Mufti slammed Centre.

Reportedly, simultaneous raids were also carried out at the offices of a local NGO called 'Athroat', a houseboat named 'H.B. Hilton' in the Dal Lake, the residence of a human rights activist Khurram Parvaiz, and two other places in the old city areas. Journalists Parvaiz Bukhari and Gowhar Geelani were also raided by NIA.

According to the NIA sources, these organizations in Jammu and Kashmir were funding terror operations by sourcing funds from foreign countries in the name of business, religion, and social works through hawala channels.

Notably, 10 raids were conducted alone in Kashmir while another carried out in Bengaluru.