The top five spots in the Engineering category remain the same as of 2021, IIT Madras leads the chart 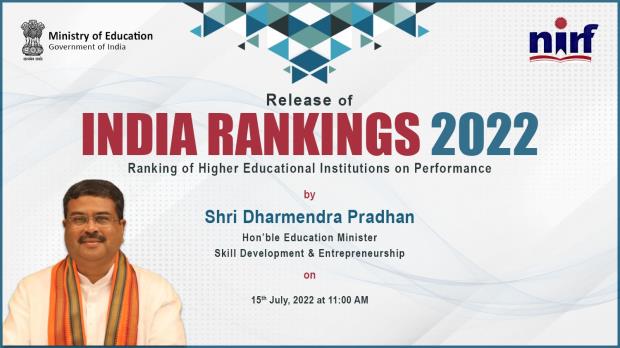 The Indian Institute of Sciences Bengaluru has retained its top spot of being the best institute in the country, in the annual ranking of the National Institutional Ranking Framework (NIRF), 2022. The NIRF ranking was revealed by Union Education Minister Shri. Dharmendra Pradhan earlier today, through a virtual session.
IISc and JNU have retained their spots in the top two, whereas Jamia Milia Islamia has moved 3 ranks up the order to be placed at 3rd replacing, Banaras Hindu University, which has now slipped to the 6th spot. Delhi University’s colleges have dominated the rankings in the College category but the university failed to enter the top 10 club. In a total of 11 categories, the rankings were announced, including overall, University, Management, College, Pharmacy, Medical, Engineering, Architecture, ARIIA (Atal Ranking of Institutions on Innovation Achievements), Law, and Research Institutions.
Top-10 universities in India as per NIRF Rankings 2022:
In the Engineering category, all premier public institute has retained the top five spots same as that of last year, With IIT Madras leading the chart, followed by IIT Delhi, IIT Bombay, Kanpur, and Kharagpur. In the year 2021, IISc Bangalore has maintained its top position in the best university category with a score of 82.67. However, in terms of the score there remained a huge gap between 1st and 2nd rank holders, JNU finished second securing a total of 67.99.
Next to JNU was Uttar Pradesh’s Banaras Hindu University with a score of 64.02 and Calcutta University with a score of 62.06. Last year, two universities from UP, BHU, and Aligarh Muslim University featured in the top 10, and similarly, JNU and Jamia Millia Islamia achieved the same from the national capital city. Manipal Academy of Higher Education, Jadavpur University, and the University of Hyderabad also made it to the top 10 list of the NIRF 2021 university rankings.