On Wednesday, Alok Kumar, Joint Commissioner of Police, Eastern Zone said, "As of now, we have not issued any written orders to shoot on the spot. Nor has curfew been imposed in any area. Yes, if the need arises, we will not miss any of these steps." 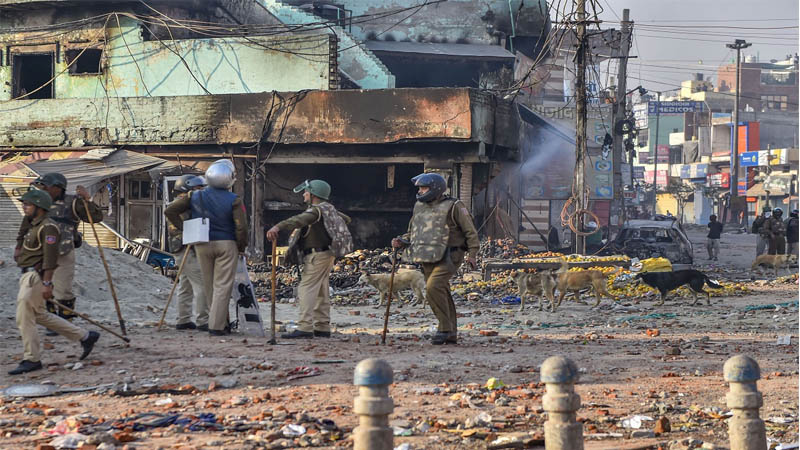 "If the conspirators, who are spreading the violence, are beginning to understand themselves, it is very good. Otherwise, the police will not hesitate to take steps from shooting to imposing curfew. It is better that they understand this," said Kumar.

The violence started on Sunday in northeast Delhi -- Jafarabad, Kardampuri, Brahmapuri, Gokalpuri, Bhajanpura, Maujpur, Babarpur, Gagan cinema in Seelampur, Karawal Nagar, Dayalpur, etc. Delhi Police's head constable Ratan Lal was among the 20 killed in the violence. The Shahdara Deputy Commissioner of Police (DCP) Amit Sharma and Assistant Commissioner of Police (ACP) Anuj are among the 57 policemen, who have been injured.

On Tuesday, in a hurriedly called press conference, the Delhi Police spokesperson Mandeep singh Randhawa said, "Many have been detained and the number is increasing. So far 11 FIRs have been filed."

A police officer of the rank of Assistant Police Sub-Inspector posted at the Dayalpur police station told an eminent news agency on Wednesday, "A murder case has been registered in the death of Havildar Ratan Lal, who lost his life in the violence in the Dayalpur police station area on Monday afternoon. The matter is being investigated. The attackers have not been identified yet. CCTVs installed near the spot are being checked."

Alok Kumar, Joint Commissioner of Police also confirmed to news agency that a murder case under section 302 has been registered and is being investigated by the Dayalpur police.

Teams of Delhi Police and para-military forces were maintaining vigil in the affected areas. After National Security Advisor Ajit Doval met the top police officials in the midnight, the police seems to have got its act better now.

Get the latest update about True Scoop, check out more about If Required Will Take Desired Actiosn, No Curfew Imposed, Have Not Given Shoot Orders & Delhi Police Over Violence