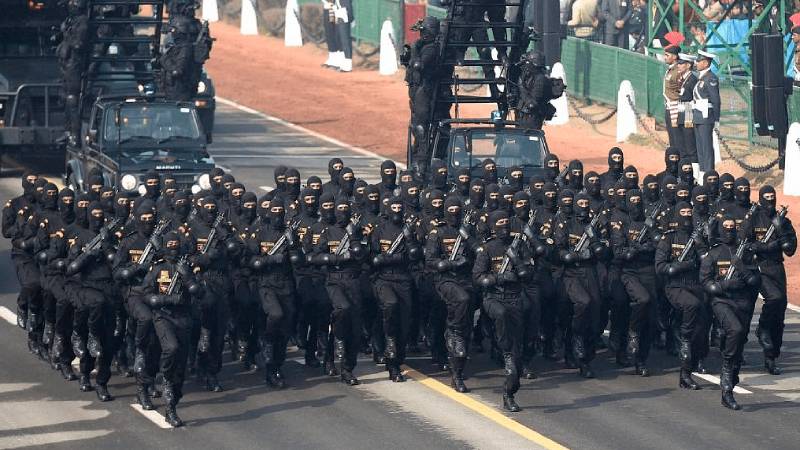 National Security Guard (NSG) commandos rehearsing for the Republic Day Parade have started gearing up for the next Republic Day parade. The NSG commandos sweat for at least five hours to give a perfect marching past on Republic Day at the majestic Rajpath.

But this year, the NSG, the elite force of India for counter-terror operations, will be making changes for the Republic Day parade according to the Coronavirus health protocols.

As compared to the previous year, only 40 per cent of the actual strength of the commandos will take part in the Republic Day Parade.

A group of commandos along with senior Indian Army and Paramilitary officers practice every day which starts at morning 5 am and continues till 10 am at Rajpath.

NSG commandos will be marching with a distance of more than 1.5 metres from each other. Earlier, they used to march down Rajpath from shoulder to shoulder.

A senior NSG official said, "We reach here at 5 am and start our practice. It is a daily routine for us. There is not much difference. After reaching Rajpath we practice again and again till our marching is flawless. Officers minutely observed every commando to make the march past flawless.”

"This year on Republic Day, we will be having more vehicles than the previous year. People will see a different energy contingent along with modified specially designed vehicles which are to be used for anti-terror operations," the official added.

Meanwhile, for the first time in  55 years that India will not have any chief guest for the Republic Day parade.

Also Read: 'Udan project' proving to be a boon for the students in Punjab

UK Prime Minister Boris Johnson was invited to the parade but his visit was cancelled amid the spread of new ‘super spreader’ coronavirus strain, detected in the UK.

It is reported that Indian-origin President of Republic of Suriname, Chandrikapersad Santokhi, is expected to be the guest of honour at India's Republic Day parade on January 26. But there is no official confirmation, yet.