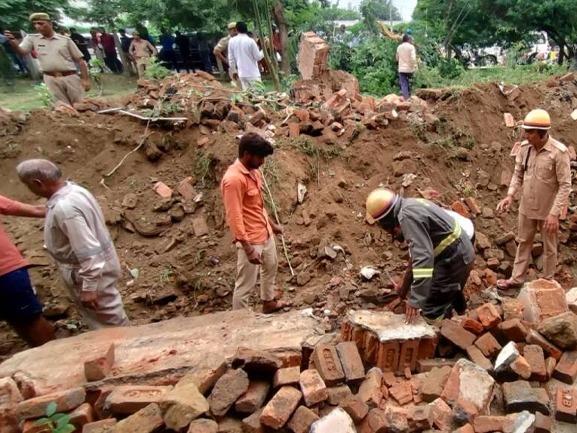 Shocking news along with heart-wrenching visuals have been surfacing on every social media platform. 100-meter long wall of a housing society has fallen off in Noida which has led to death of 4 people till now. The wall is of Noida’s Sector-21 Jalvayu Vihar Society. The rescue operation to help the people stuck under the debris is still underway. The deceased have been identified has Pappu, Pushpendra, Amit and Panna Lal.

The major accident happened as the work of cleaning the drain was going on and while removing a brick to carry out the task, the whole wall of the drain collapsed. The laborers working there got buried inside the debris. The contract for cleaning the drain was given by the authority of Noida. The injured have been admitted to the district hospital and Kailash Hospital. The doctors declared all four brought dead.

The task of cleaning the drain was going on for the last two days in which around 15-20 laborers were involved. It was when they were working only, that the wall suddenly collapsed. The Noida Authority official claimed that the wall which has fallen off was built around 25 years back and was not maintained properly. He further added that this was the reason why the foundation of the wall got weak and fall off so suddenly

The video shared clearly shows that JCB has been brought to the spot to clear the whole debris as it is being feared that around 8-9 more people could have been trapped under it. Till now information about residents caught inside the debris has not come up.

Senior officials along with the police is present on the spot and they have assured that the rescue work will be completed soon. An ambulance has also been called on the spot to cater to any emergency that can happen. CM Yogi Adityanath has expressed grief over the accident.