Janhit Mein Jaari: Nushrratt posed for photographers in the city wearing a strapless dress with a self-designed mesh overlay. 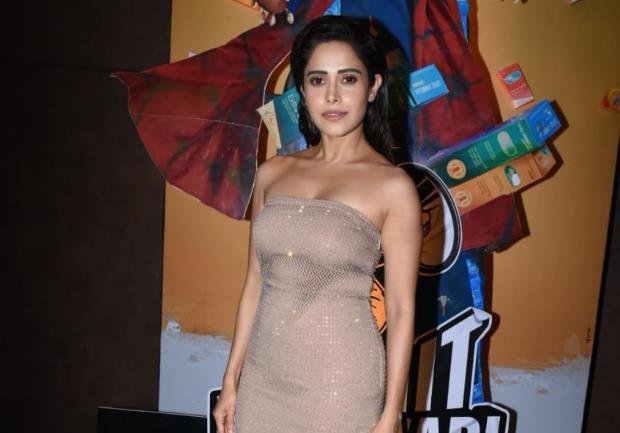 Janhit Mein Jaari: Nushrratt posed for photographers in the city wearing a strapless dress with a self-designed mesh overlay. The asymmetrical hemline saw a flowing train with a diagonal shorter length seen in front.
The dress was entirely neutral coloured in a nude shade that matched her skin tone. Ms. Bharuccha then went ahead and paired the outfit with neutral coloured gladiator heels, tied tightly at the ankle.
Nushrratt Bharuccha's film is ready to knock in theatres and will be released soon in theatres' Janhit Mein Jaari'. This new film by Vinod Bhanushali and Raaj Shaandilyaa is based on a different theme which will try to break the old stereotypes.
The film Janhit Mein Jaari is produced by Think Ink Productions in association with Jai Bhanushali Studios Limited and Shree Raghav Entertainment LLP. Nushrratt Bharuccha has shared the post through her social media account about the release date of the film Janhit Mein Jaari. The film will be released in cinemas on June 10.
The film's actress along with the makers announced this with a very unique message while releasing a cute video on social media, with the message, "Ek womaniya hai sab pe bhari, ye suchna hai released in Janhit Mein Jaari! And Nushrratt has also seen wearing a message full t-shirt for some stalkers which have written" Stalking Karne Wale Say Daro, Condom ke istemal say Nahin".
Also Read: Shehnaaz Gill spotted in simple brown 'sleeveless top' with Brahma Kumaris sister at Airport; 'We miss Sidharth': Fans
Will be released soon released 'Janhit Mein Jaari'
Giving information about the release of the film, actress Nushrratt Bharuccha shared the post from her Instagram account and wrote, 'So far you have seen many big films, but now it is the turn of this Womania, which is coming. It is a big idea, this information is ready to be released in cinema on June 10, Janhit Mein Jaari'.
These actors will be in the film
The shooting of the film Janhit Mein Jaari was started in September last year but due to Corona, its shooting had to be stopped, although the team completed the shooting in December and now the film is all set to hit the floors. Capable actors like Tinu Anand, Vijay Raaz and Paritosh Tripathi are going to be seen in the film.
The film is produced by Vinod Bhanushali, Kamlesh Bhanushali, Vishal Gurnani, Raaj Shaandilyaa, Vimal Lahoti, and Shraddha Chandavarkar. Bunty Raghav and Rajesh Raghav, and Juhi Parekh Mehta have co-produced the film. The movie will be released by Zee Studios.