Post the screening was over, Nushrartt’s parents got teary-eyed and the entire Bharuccha family shared a very intimate moment. Her parents were proud of their daughter’s success. 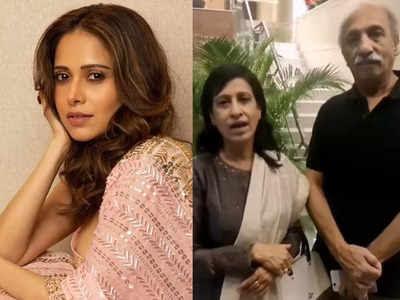 Janhit Mein Jaari Day 2 Box Office Collection: The box office collection of Nushrratt Bharuccha starrer film 'Janhit Mein Jaari' saw a tremendous increase on the second day. There has been an improvement in the box office collection of the film as compared to the first day and now if similar growth is seen on Sunday also, then it can be assumed that the film will once again enter the box office race.
The film's tickets have been kept cheap, and the makers of the film 'Janhit Mein Jaari', which was released at the box office this Friday, deliberately kept the price of the tickets low so that people reach the theatres to watch the film.
Movie tickets are also available for Rs.100. It was believed that this will see business growth, but on the contrary, the film has become overshadowed and people are assuming that the ticket price has been reduced due to being a bad film.

Also Read: Nushrratt Bharuccha pleased with meaty characters coming her way
60% growth in business on the second day, however, despite all these things, the film's business saw a 60% growth on Saturday as compared to the opening day. While the film had earned only Rs 43 lakh on Friday, according to the information available so far, it earned Rs 70 lakh on Saturday. The film will have to look similar on Sunday to stay in the race.
What is the story of the film?
The story of Nushrratt Bharuccha starrer 'Janhit Mein Jaari' is story related to condom seller. The story of the film has been written by the writer who wrote the superhit story like 'Dream Girl'. The story of the film is unique but according to the public reaction, the second half of the film remains raw as compared to the first half.
Post the screening was over, Nushrartt’s parents got teary-eyed and the entire Bharuccha family shared a very intimate moment. Her parents were proud of their daughter’s success. Talking about the same, her father says “I saw a lovely actress on screen, I didn't believe that was my daughter”. While her mother added, “It was good and I am so proud of her. God bless her and I hope she sees more and more success in her life”.