Public schools in New York City have started a new school year with full in-person classes amid widespread calls for an online option as the country is witnessing a resurgence of Covid-19. 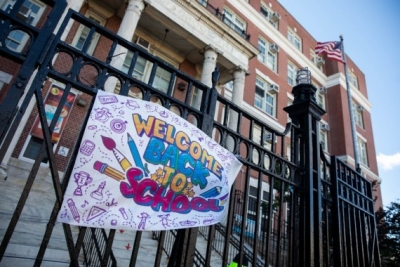 Public schools in New York City have started a new school year with full in-person classes amid widespread calls for an online option as the country is witnessing a resurgence of Covid-19.

The public school system in New York City, the biggest in the US with about 1.1 million students, witnessed the return of most of its students with joy and anxiety on Monday, reports Xinhua news agency.

All students and staff members are required to wear masks at school and classrooms, and cafeterias will have air purifiers, with each classroom to be sanitised each night.

"It's so good to see all our kids coming back to school in person where they can learn best," said de Blasio, adding that testing and tracing make schools in New York City the safest public school system in the US.

New York City mandated all staff members to get vaccinated by at least one shot by September 27.

"And as everyone knows, in the coming days every single adult in our schools is going to be vaccinated. Over two thirds of our kids, 12 to 17 years old, vaccinated," said de Blasio.

New York City Schools Chancellor Meisha Ross Porter urged people to get vaccinated, saying it was the key to recovery.

Now, students aged 12 and above are not mandated to get inoculated and the federal regulator has not approved Covid-19 vaccines for kids younger than 12 years old.

According to Porter, 74 per cent of teachers have received at least one shot of Covid-19 vaccine.

Meanwhile, parents, municipal workers and even children participated in a rally from the City Hall to Washington Square Park on Sunday demanding a remote learning option and safer conditions.

Another rally was held on September 10 at the building of the Department of Education in Lower Manhattan demanding for the same.

A number of parents of students from Public School 229 in Queens sent emails to or called schools asking for a remote learning option and some parents said they won't send their children to school on the first day or for a few weeks.

New York City has put into place rules on quarantine and even school closures in case of infections and Porter admitted that remote learning is a tool at hand.

As many as 87 school-based employees died of Covid-19 in New York City since March 2020, according to the Department of Education.