SGPC President Harjinder Singh Dhami called this act reprehensible, while the opposition is also preparing to play politics on it. Author : Samriti Bharadwaj 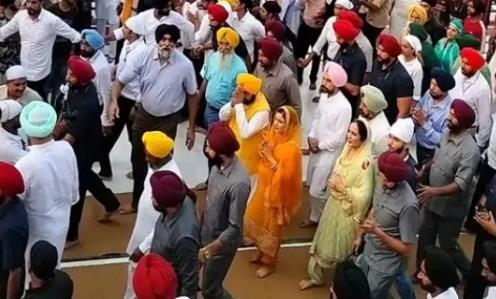 Significantly, on Sunday, the first Prakash Parv of Sri Guru Granth Sahib was celebrated at the Golden Temple. Chief Minister Bhagwant Mann, his wife Dr. Gurpreet Kaur, and their family arrived there in the evening. The police had also closed the highways leading to the Golden Temple as a result of the VIP movement, and the Sangat had also been stopped for the CM at the Golden Temple Complex. On which SGPC Principal Advocate Harjinder Singh Dhami has objected.

Pradhan Dhami said that it is condemnable for CM Mann to come as a VIP on the occasion of Prakash Parv. The leaders should come to the Gurughar to bow their heads like common Sikhs, and not in a dictatorial manner.   The first Prakash Parv was an important day for the Sangat and all the gurus had come to the Gurughar to bow down. But the treatment done to the devotees is going to hurt the faith.

SGPC head Dhami said that earlier the same had happened in Sultanpur Lodhi. Due to this, the interim committee decided to conduct a meeting and issue a request to the politicians not to disrupt the Sangat as they are bowing to the Gurughars. CM Bhagwant Mann should not commit acts that hurt the faith of the devotees.