Alia Bhatt opened up about Ranbir Kapoor's comment about expecting 'twins' from her, however, in order to do so she mistakenly suffered a 'slip of tongue' 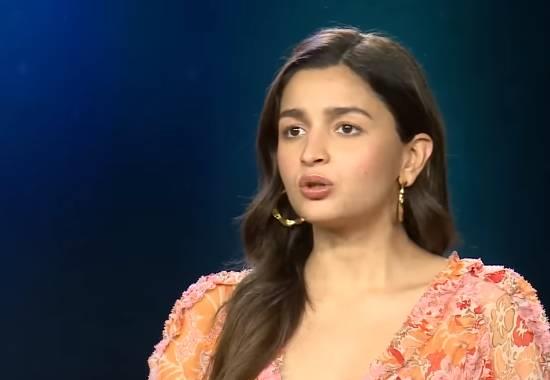 Bollywood actress Alia Bhatt is currently on a promotional spree for her upcoming movie Darlings. However, this time, Alia Bhatt is donning the hat of a Producer meaning with the movie Darlings she will be making her film production debut through her banner Eternal Sunshine Productions, in collaboration with superstar Shah Rukh Khan's Red Chillies Entertainment. Recently, Alia Bhatt opened up about Ranbir Kapoor's comment about expecting 'twins' from her, however, in order to do so she mistakenly suffered a 'slip of tongue'.
Recently, Alia Bhatt appeared on Siddharth Kannan's YouTube along with the star cast of Darlings and debunked Ranbir Kapoor's 'twins' remark. Alia Bhatt was asked about Ranbir Kapoor's comment in which he said that he would love to have twins or will be elated if it happens. Following that reports started doing rounds that Alia Bhatt and Ranbir Kapoor might be expecting twins.
However, Alia Bhatt debunked all reports of twins and also clarified that her husband Ranbir Kapoor had said that on a lighter note. However, in doing so, Alia Bhatt suffered a slip of tongue saying, 'Oh god, f***'.
Are Alia Bhatt-Ranbir Kapoor Expecting Twins?
Also Read: 'Spreading false hood': Sushant Singh Rajput fans trend #BoycottFlipkart over T-shirt design; Here's why
Speaking on the 'twins' report, Alia Bhatt said, "Oh god, f*** pardon my french. Singular. Ranbir was doing some joke on some Reel and apni hi paed pe unhone kulhadi maar di (He walked into it). Clearly humare paas dearth of info aur news hai toh yeh bhi ek news item ban gaya hai (Clearly we don't have enough things making headlines in the country that this did). The world should pray for health, happiness and goodness for me and Ranbir... Mujhe bhi baad m pata chala (even I learnt about this later).
Ranbir Kapoor's twins' comment
Ranbir Kapoor in an interview was asked to tell a truth and lie. On that, the Shamshera actor said, "I am having twins, I am going to be part of a very big mythological film, I am taking a long break from work," leaving his fans to guess the actual truth.