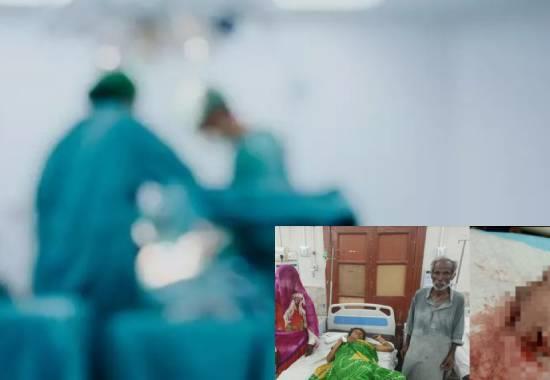 In what can be called pure evil and an act of disgrace, a Hindu woman was miraculously saved after the staff of the government-run Rural health centre (RHC) in the Sindh province in Pakistan reportedly cut off a newborn baby’s head and left the severed head in the mother’s womb. The blood-boiling incident took place on Sunday. The Pakistan newborn beheaded baby report has shocked the entire world. In fact, Pakistan's newborn baby beheaded viral photo is doing rounds on social media.
As per OPIndia, the Hindu woman belongs to the Bheel community and is 32 years old. The Pakistan newborn beheaded baby mother was reportedly rushed  to a neighbouring hospital in Mithi, but there were no medical facilities available to treat her. As a result, the Hindu woman's family took her to Jamshoro’s Liaquat University of Medical and Health Sciences (LUMHS), where the newborn’s severed head was removed from the mother’s womb, saving her life.
The report quoted Professor Raheel Sikander, head of the gynaecology unit of LUMHS, said that the there was no female gynaecologist available at the RHC, therefore,  the inexperienced staff caused such type of deadly incident.
Also Read: Pakistan's role under scanner in Moosewala murder
"The Bheel Hindu woman, who belongs to a far-flung village in Tharparkar district, had first gone to a Rural Health Centre (RHC) in her area but with no female gynaecologist available, the inexperienced staff caused her immense trauma," said Professor Sikander. Furthermore, he stated that a botched procedure on Sunday, an RHC staff cut off the unborn baby’s head and left it in the mother’s womb
Notably, after Pakistan beheaded newborn photos and reports went viral, the government came into action. Reportedly, the Pakistani government intervened in the matter after the tragic incident started doing rounds on social media and directed authorities to form a medical investigation board to investigate the tragedy and find the perpetrators.