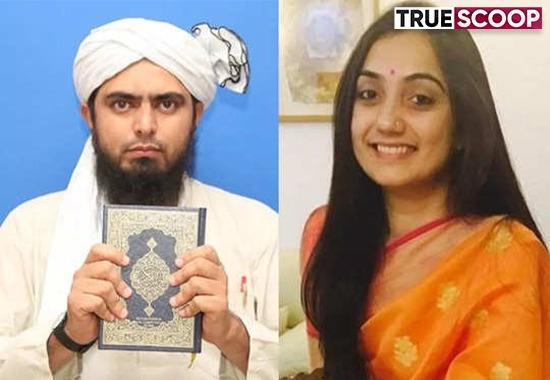 Nupur Sharma Row: Suspended spokesperson of Bharatiya Janata Party (BJP), Nupur Sharma is in the headlines for making controversial statements on Prophet Mohammad.
Her statement has created a ruckus in Muslim countries and they are targeting India. There was also a demonstration against Nupur Sharma in the neighbouring country Pakistan. But now in the meantime, there has been a voice in her support. Maulana Engineer Muhammad Ali Mirza of Pakistan has supported Nupur Sharma.
He has accused Muslims of protesting against her. Maulana Ali said that Muslim panellists first provoked Nupur Sharma and in response to this the suspended spokesperson of BJP commented about the Prophet. Muhammad Ali Mirza said that the first culprit is a Muslim who has talked about one's religion on live TV. He said that we have to see the whole atmosphere in this entire controversy.
From the style of Nupur Sharma's statement, it will be known that she is retaliating. Nupur Sharma said that if you talk like this, then we will also say this. He said that the first criminal is a Muslim who talked about one's religion in a live TV program. Muhammad Ali further says that it is not according to the Quran that you should joke about someone's religion when it is an anti-religion of yours. While arguing with people of other religions, we should take care of the language and Allah has given us this message.
Also Read: UAE suspends export & re-export of Indian wheat for 4-months, Is Nupur Sharma's remarks behind it?
Maulana Ali said that in the Nupur Sharma controversy, people of Arab countries are provoking the atmosphere by sitting in ACs, while in India people are demonstrating in the scorching heat and the policemen are answering them.
Keeping his point, Muhammad Ali further says that this is an international politics. Arab countries are their slaves which are not made by Russia. These countries instigated Arab countries against India. Before this, there have been many big cases in which Arab countries did not react. Now Arab countries were instigated to put pressure on India regarding Russia.