Kannada star Yash has refused to endorse the brand Pan Masala. It is being told that it was a deal worth crores. This has been confirmed by his agency. 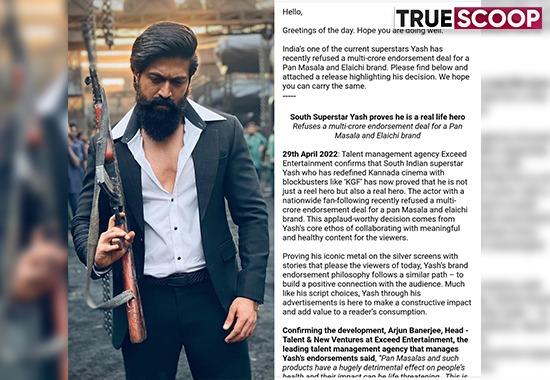 Pan Masala Ad: South superstar Yash is in a lot of discussions these days about his film KGF Chapter 2 and his film is making a splash in the blockbuster. In such a situation, Yash is dominated by social media.
Because of this, the actor is in great demand. Meanwhile, there are reports that Kannada star Yash has refused to endorse the brand Pan Masala. It is being told that it was a deal worth crores. This has been confirmed by his agency.
The Name Of The Group Was Given 'The Storm Is Coming'
Arjun Banerjee, head of the Talent Management Agency, gave this statement to the press that, 'I remember when we became part of the team along with Yash and his close friend and colleague Prashant in March 2020.
We formed a group for communication and called it The name 'Toofan Aa Raha Hai' was given and this is the belief that we have put in the film, at a time when no one knew when KGF 2 would be completed.
Also Read: KGF 2 dream run at BO, breaches Rs 1,000 crore mark
Pan Masala Brand's Offer Of Crores Turned Down
He added, “At this point, we as a team are only looking at long-term partnerships, whether in the form of strategic investments, support or equity deals. Recently we have turned down a multi-crore offer from a pan masala brand and we are paying a lot of attention to who we associate with.
Given their pan-India presence, we want to use this opportunity to spread the right message to their fans and followers and invest our time and sweat with brands that are like-minded and want to play the long game. Huh."
Akshay Kumar Has Also Apologised
Recently, Akshay Kumar apologized to his fans for the advertisement for Pan Masala. Akshay had to face huge displeasure from the people on social media. He had said in his post, that I would like to apologize to all my fans and well-wishers.
Your responses have impressed me a lot for a few days. Although I have never endorsed tobacco, nor will I ever again.
KGF 2 Has Crossed Rs 1,000 Crore Mark
Significantly, Yash's film KGF 2 has crossed the Rs 1,000 crore gross mark at the worldwide box office. There are many stars like Srinidhi Shetty, Sanjay Dutt, and Raveena Tandon with Yash in this film.
This film has broken many records, the series of which is continuing.
Only the Hindi version of the film has earned 353.06 crores at the box office.