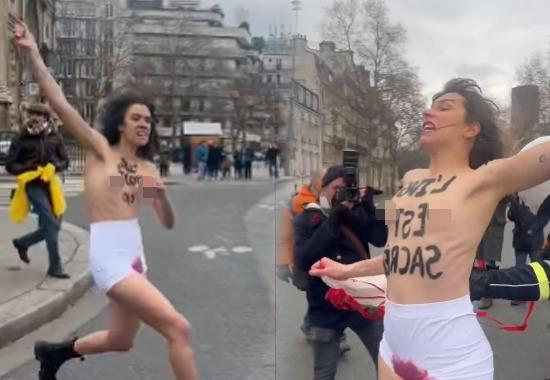 6 women activists on Sunday went topless on streets to 'strongly' disrupt a demonstration against abortion and euthanasia in Paris, before being taken into police custody. Topless women Paris abortion law protest was conducted by a feminist group named FEMEN. The bare-chested FEMEN women were filmed and ever since the video has been breaking the internet. In the Paris topless women protest video, it can be seen 6 activists were bare-chested and had white shorts with red ink on the groin, attempted to disrupt the demonstration with slogans of 'Abortion is sacred, march for whose life?' before being apprehended by the police. Notably, the naked protestors' demand is to enshrine abortion in French Constitution. The Abortion Bill is expected in the French Senate on Feb 1. The bill has already been approved by the French Assembly.

Notably, on January 22, a large crowd consisting of thousands of individuals marched against abortion and euthanasia in Paris. As per French media reports, the Police estimated the number at 6,300 and the organizers claimed it to be around 20,000 participants. Participants gathered at Gare Montparnasse before marching to Place Vauban for a final rally until 5:30 pm in the evening. However, the demonstrations were disrupted by a group of 5 female ‘activists’ from FEMEN, who ran topless and were wearing white shorts with red ink on the groin area to register their opposition to the anti-abortion rally.

As a result, the topless women were detained. However, they were subsequently released after spending 7 hours in police custody. Out of the group, 2 are prohibited from entering the 7th arrondissement for 3 months and will be required to appear in court in June. The remaining 3 individuals were not charged with any crimes.