Salman Khan's guest appearance in Pathaan has broken the internet and fans are hailing 'Tiger' for making a cameo in the spy-thriller. Author : Ujjwal Samrat 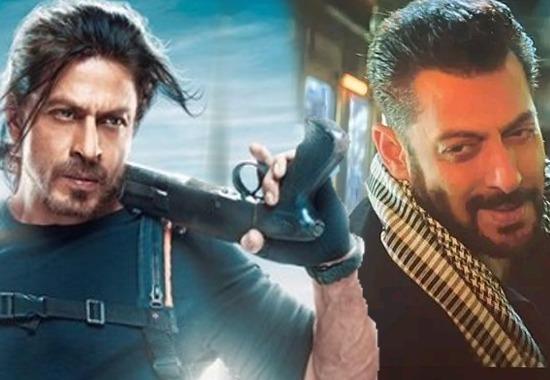 The much-awaited Pathaan was finally released in theaters on Wednesday a day ahead of the Republic Day 2023 holiday. Starring Shah Rukh Khan, Deepika Padukone, and John Abraham in the lead roles, Pathaan is directed by Siddharth Anand. SRK's Pathaan is among the dream projects of Aditya Chopra's 'spy universe' and therefore Yash Raj Films (YRF) is banking big upon the recently released spy thriller. After witnessing record-breaking advance booking, Pathaan review has started to come in and fans are going gaga over it. However, it is Shah Rukh Khan and Salman Khan's screen sharing together which has broken the internet and sent fans into a frenzy. Yes! you heard it right. Salman Khan's guest appearance in Pathaan has broken the internet and fans are hailing 'Tiger' for making a cameo in the spy-thriller.

Although we cannot reveal how Salman Khan's character made a cameo in Pathaan, fans in theaters could not remain silent in theaters when they saw the duo sharing the same screen. However, like mentioned above, Pathaan is the first step of Aditya Chopra's dreamy spy universe, it can be said that Salman Khan's character of Tiger might have come to help Shah Rukh Khan's character of Pathaan. Interestingly, both Tiger and Pathaan are RAW agents in their respective movies. Before Pathaan, Salman Khan made a guest appearance in Shah Rukh Khan's movie Zero which was created by Ananad L Rai.

From #KuchKuchHotaHai to #Pathaan one thing never changed , the aura - the screen presence of #SalmanKhan which undoubtedly makes him the biggest star of nation , not everyone can get loudest ever cheers through the special appearances.

Taran on his Twitter wrote that Pathaan has the potential to be the blockbuster of 2023. Furthermore, Taran Adarsh gave Pathaan 4.5 stars out of 5 which is rare for him as well. "#OneWordReview...#Pathaan: BLOCKBUSTER. Rating: ⭐️⭐️⭐️⭐️½ #Pathaan has it all: Star power, style, scale, songs, soul, substance and surprises… And, most importantly, #SRK, who’s back with a vengeance… Will be the first #Blockbuster of 2023 (SIC)."

Joginder Tuteja wrote, "#Pathaan is STUPENDOUS! It’s adrenalin inducing stuff that’s gonna set box office on fire. What a SUPER ENTERTAINING film. From 1st to last frame, just Dhamaka all the way! #ShahRukhKhan makes the BIGGEST comeback of all times! Sorry, I am wrong. He never went away!"

Before this, it was reported that the Siddharth Anand directorial is selling tickets like hot cupcakes and is already scoring new records at the box office as far as advance booking is concerned. On Monday night, Shah Rukh Khan, Deepika Padukone, and John Abraham fronted film topped the Hrithik Roshan and Tiger Shroff led War to score the biggest advance of all time for a Bollywood film. By Monday midnight, Pathaan sold 4.19 lakh tickets in the three national chains, PVR, Inox, and Cinepolis – surpassing the previous record holder, War, which had sold 4.10 lakh tickets in the aforementioned multiplexes.

Talking about Pathaan's storyline, Shah Rukh Khan will be seen as Pathaan, a RAW field agent, in the film. Pathaan's music has become a talking point, especially Besharam Rang.