Patiala Clash Updates: The atmosphere remained tense in Punjab's Patiala after the violence between Shiv Sena workers and Khalistan supporters on Friday. 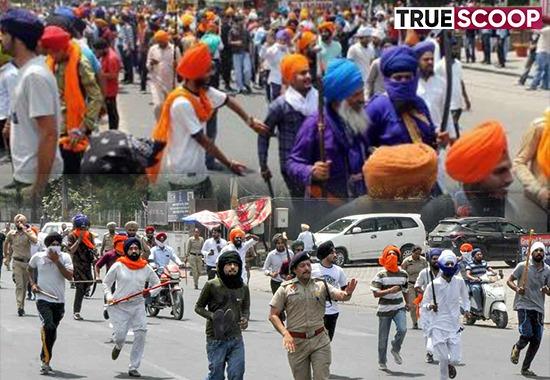 Patiala Clash Updates: The atmosphere remained tense in Punjab's Patiala after the violence between Shiv Sena workers and Khalistan supporters on Friday.
At the same time, Hindu organizations are now angry with the attack on the Kali temple during the violence. Angered by the attack on the temple, Hindu organizations declared a bandh in Patiala on Saturday, 30 April.
This bandh has been announced by a Hindu organization named Shiv Sena Hindustan. The president of this organization has said that the temple had nothing to do with the march.
Despite this, Khalistan supporters attacked the temple. That is why today he will protest with his workers demanding the arrest of Khalistan supporters who attacked the temple.
Curfew till 6 in the morning
While the police force has been deployed in the area for security, the curfew has been imposed from 7 pm to 6 am on Friday. At the same time, CM Bhagwant Mann has ordered an inquiry in this matter.
The Aam Aadmi Party (AAP) said that it will not allow anyone to disturb peace and harmony in the state. The ruling party in Punjab also said that 'all miscreants should be brought to justice and punished.
Also Read: Patiala Hindu-Sikh Clash: What did Mann say? Oppositions reaction, How many held? Curfew imposed; Know All
Clashes between two groups:
Clashes between Shiv Sena workers and Khalistan supporters During this many stone-pelting also happened. At the same time, swords were also seen in the hands of many people. The situation has remained tense after this clash.
A heavy police force is deployed in the area. Shiv Sena workers took out Khalistan Murdabad march in Patiala. This march was announced a day earlier.
It was said by Shiv Sena that it will never allow Khalistan to be formed in Punjab. After this, some Sikh organizations also came out on the road raising slogans. This clash took place only during this March.