Petrol & Diesel shortage in Country: In states like Madhya Pradesh, Rajasthan and Karnataka, there has been an acute shortage of oil in some petrol pumps following the increase in demand. 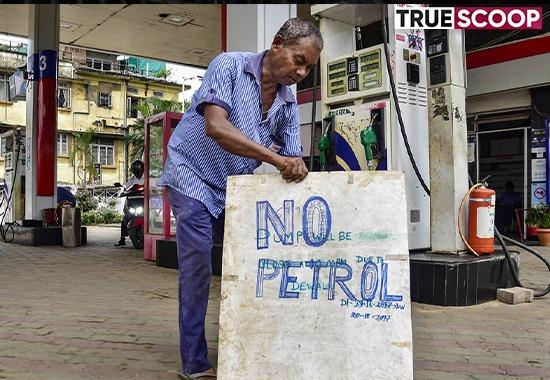 Petrol & Diesel shortage in Country: In states like Madhya Pradesh, Rajasthan and Karnataka, there has been an acute shortage of oil in some petrol pumps following the increase in demand. Petrol sales have been cut by private fuel retailers against the rates of public sector companies to prevent huge losses.
The government, however, maintained that there is a sufficient supply of petrol and diesel to meet the additional demand, but also acknowledged that there were delays due to overcrowding at PSU bunks and increased waiting times for customers.
Heavy loss on petrol and diesel
PSU fuel retailers Indian Oil, HPCL and BPCL have not increased the prices of petrol and diesel with the increase in crude oil (cost of raw material). They sell petrol at a loss of Rs 14-18 per litre and diesel at Rs 20-25. This is a loss that private retailers Naira Energy, Jio Pi and Shell have not been able to bear.
Some petrol pumps of Hindustan Petroleum Corporation Limited (HPCL) and Bharat Petroleum Corporation Limited (BPCL) in states like Rajasthan and Madhya Pradesh have faced a severe shortage of diesel, especially after customers from private retailers shifted.
Also Read: Rajasthan petrol pumps go dry from paucity of fuel supplies
Over 40% of sales at HPCL pumps
HPCL said in a tweet that its pumps in Rajasthan saw an increase of around 41 per cent in sales of petrol and 32 per cent in diesel in May compared to the previous month, while sales of private companies increased respectively. declined by 10.5 percent and 30 percent. Petrol sales in Madhya Pradesh increased by 40.6 per cent and diesel sales by 46.1 per cent, while private fuel retailers declined by 4.3 per cent and 29.5 per cent. BPCL has also seen a similar jump in these states.
The Oil Ministry said in a statement that over the past few days there has been a heavy rush at PSU retail outlets (petrol pumps) in some areas, leading to delays and waiting time for customers. This has fueled speculation of supply constraints in the public sector oil marketing companies.
In some states, the demand for petrol and diesel has increased by 50 percent in the first half of June as compared to the corresponding period of last year. Especially it has been observed in Rajasthan, Madhya Pradesh and Karnataka.
The ministry said these are states where large quantities of supplies were being made by retail outlets belonging to private marketing companies and where the distance from the supply locations i.e. terminals and depots is long.
The ministry attributed the increase in demand to the seasonal increase due to agricultural activities. Bulk buyers are turning to state-run petrol pumps and there has been a sharp drop in sales by private firms, whose quantities have been shifted to PSU banks.