PM Modi: 'PM's life was in danger for 20 minutes' and Congress asking 'how is the josh?' , Smriti Irani hits back at Srinivas' wife

At a news conference against the BJP headquarters in Delhi, Union Minister Smriti Irani fires back at Congress leader Srinivas' wife . PM Modi's life was in danger, according Smriti Irani, is now in jeopardy. 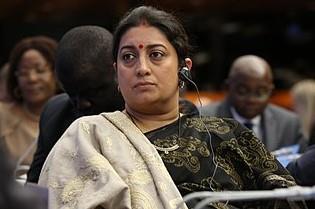 New Delhi/Bathinda: The Bharatiya Janata Party (BJP) has slammed the Punjab government for alleged security failures during Prime Minister Narendra Modi's visit to Bathinda. At a news conference at the BJP headquarters in Delhi, federal minister Smriti Irani responds to Congress leader Srinivas’ wife. PM Modi's life was in jeopardy for 20 minutes, according to Smriti Irani, and Congress was inquiring how the josh was doing.
At a press conference, Smriti Irani raised multiple questions while criticizing the Congress. "We know that the congress hates Modi," smriti irani stated. He attempted to bring the country's prime minister into disrepute. When the security of PM Modi's convoy was breached, congress leaders were overjoyed. He was inquiring about Josh. What kind of occasion is this?"
After PM Modi's event was postponed, srinivas' wife tweeted that Srinivas' wife had made a joke at the BJP. According to Srinivas, the seats at the Ferozepur event were empty, forcing PM Modi to return.
'How is Josh?' tweeted Srinivas.
Trapped on the flyover for 20 minutes at p.m. Due to demonstrations, pm was stuck for 15 to 20 minutes on an overpass in Punjab.
The prime minister's security has been deemed a severe failure by the union home ministry, which has requested a report from the state government on the topic. The prime minister's programme in Ferozepur was postponed, and the rally in Ferozepur was postponed.
Also Read : Will Punjab govt ban political rallies amid Covid surge?
The prime minister was set to lay the foundation stone for a development project worth over Rs 42,750 crore, including the satellite center' of the chandigarh-based institute of medical education and research (pgimer) at Ferozepur and the Delhi-Amritsar-Katra highway. He was also set to speak at a gathering later.