General Rawat will review the tri-services preparedness against the aggressive People's Liberation Army (PLA), as well as understand the proposed de-escalation and disengagement process at the four stand-off points. 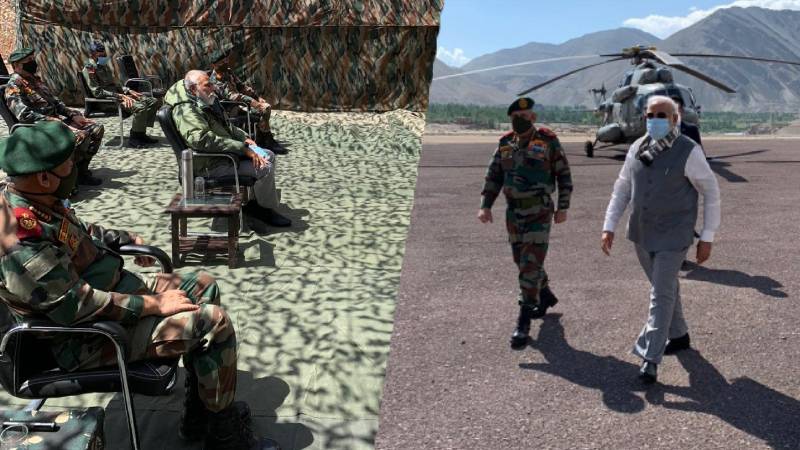 Amid ongoing tension at borders with China in Eastern Ladakh, Indian Prime Minister Narendra Modi paid a visit to Leh and forward locations on Friday morning to review the ground security situation, barely 18 days after a violent stand-off.

Sources said that Modi reached Ladakh early morning and briefed by the Army, Air Force and the Indo-Tibetan Border Police at one of the forward locations in Nimu. Located at 11,000 feet above sea level, Nimu is among the tough terrains, surrounded by the Zanskar range and on the banks of the Indus.

The Prime Minister, accompanied by Chief of Defence Staff General Bipin Rawat and Army Chief General Manoj Mukund Naravane, will also interact with injured soldiers at the military hospital in Leh, in what will be a morale booster for the forces.

General Rawat will review the tri-services preparedness against the aggressive People's Liberation Army (PLA), as well as understand the proposed de-escalation and disengagement process at the four stand-off points.

Modi's visit comes just a day after Defence Minister Rajnath Singh called off his own visit to Ladakh. Singh was to visit Eastern Ladakh region to interact with soldiers deployed at the hostile border on Friday. He had plans to interact with the soldiers injured during the barbaric attack carried out by Chinese People's Liberation Army on June 15. In the attack, India lost 20 soldiers and Chinese Army too had casualties, figures still unknown.

Also Read: "No physical tickets will be issued": MHA issues guidelines for reopening of monuments, museums

On June 17, Prime Minister Narendra Modi had stated that the sacrifice made by 20 soldiers who went down fighting against the People's Liberation Army (PLA) at Galwan Valley on June 15 night "will not go in vain".

He also said that while India wants peace, it will give a "befitting reply" if provoked. "India's integrity and sovereignty is supreme for us, and no one can stop us from defending it. Nobody should have any iota of doubt about this," said Modi. "Indian troops went down fighting (maarte, maarte mare hain)," he had said.

Modi also said that the whole country is with the families of those who sacrificed their lives for the country. "India will defend every stone every inch of its territory. India is a peace-loving country which has always tried to maintain cooperative and friendly relations with neighbours."